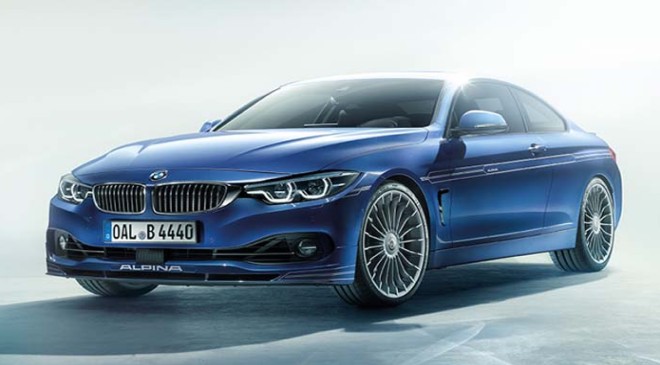 However, it’s missing the production-ready bumpers.

The BMW Group is growing to include Alpina, but it will be business as usual for the Buchloe-based manufacturer until 2025. Meanwhile, the first order of business is to expand the portfolio to include the first-ever B4 Gran Coupe. Teased over the weekend, the M4 GC substitute has now been spied without any camouflage whatsoever. As expected, it’ll be the only version of the 4 Series Gran Coupe family to come with quad exhausts.

Looks can be deceiving as although the prototype doesn’t have an ounce of disguise, it’s not the production-ready model either. The teaser published on Saturday showed a subtle spoiler on the tailgate along with retro-flavored gold decals on the sides. In addition, that’s not the final rear bumper since it’s borrowed from the M440i. You can tell by cutouts in the rear bumper’s skirt for the quad exhausts as they look like they were made by my three-year-old daughter.

The blue brake calipers with “Alpina” lettering hide behind smaller wheels wrapped in winter tires. The production model will certainly have the larger multi-spoke alloys with their timeless design. At the front, it’s déjà vu since the bumper is once again taken from the BMW M440i Gran Coupe. Prototypes spotted in 2021 had a camouflage front lip reserved for the road-going B4.

Mechanically, there shouldn’t be any surprises. The xDrive-only B4 is likely going to inherit the setup used by the B3 Sedan and B3 Touring. That means Alpina is going to use the same S58 engine found in the M3 and M4, tuned to deliver 456 horsepower and 516 pound-feet (700 Newton-meters) of torque. Expect performance to be virtually the same as the B3 Sedan’s, which needs 3.8 seconds until 62 mph (100 km/h) and maxes out at 188 mph (303 km/h).

Alpina Is Busy As A Bee:

Alpina doesn’t waste a lot of time with teasers, so the B4 Gran Coupe should debut in the coming days. It’s unclear whether a D4 S with a diesel engine will follow and we also don’t know if the coupe and convertible body styles will return for a new generation.