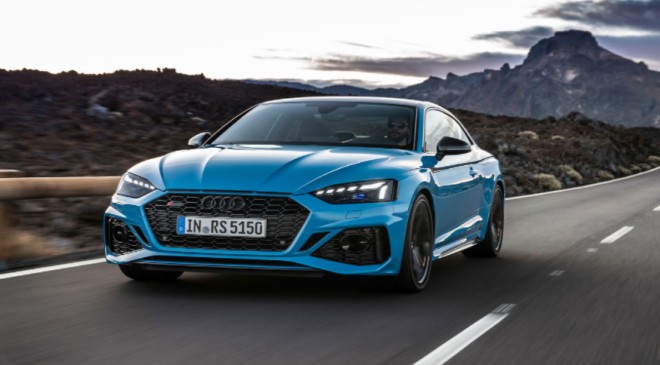 When it comes to bazooka-wielding super sedans the name ‘RS5’ doesn’t immediately come to mind, given that, up until recently, Audi India only provided it in two-door guise. And gosh, it was a thing of beauty. Despite the overall cylinder count having dropped by a factor of two, the twin-turbo V6 in the RS5 was never in want of greater power. It sounded terrific, went like hell and yet, allowed the car to be even more boulevard friendly than the R8.

The new RS5 is not a two-door car. Audi India decided that adding to their already prolific list of Teutonic powerhouses was the way to go and so we got the new RS5 Sportback. In this faux-militaristic ‘Sonoma Green’, the Audi is easily the best looking car among its fairly provocatively dressed peers. It’s taut, muscular and chiselled in a way only yesteryear pulp protagonists could be. So good looking in fact, that Audi can be forgiven for bringing it to our shores with an additional set of doors.

The first time I drove the RS5 Sportback was on a racetrack not too long ago, where it was all but eclipsed by its V8-yielding siblings. And yet, the RS5 managed to hold its own. That rorty V6 allowed the car to dart past chicanes like a viper chasing a gerbil once you discovered its meaty mid-range. Like all performance Audis, the RS5 has an unbreakable bond with traction which can work to the enthusiast’s chagrin, especially on the race track. Audi caters, not to the infantile whims of the side-winding helmsman, but to the mature and sensible driver who prefers total adhesion to the road and fistsful of colon-crushing linear speed. It’s 1,742 kg of pedigreed German muscle in a finely-tailored suit. A friendly neighbourhood torpedo of sorts.

The RS5 Sportback, in urban confines with mostly mortal cars to contend with, feels like a very different animal. The 2.9-litre, twin-turbo V6 making a solid 450hp, has the sort of creamy smoothness that ruins other, lesser cars for you, the instant you bury the throttle and try to play a game of tag with the horizon. In fact, it’s very easy to forget from time to time that this car is much larger and heavier than its sexy coupe predecessor. Given the staggering levels of torque, Audi has dispensed with a dual-clutch transmission unit and plonked an 8-speed automatic here. But you’re always suspicious of another clutch lurking about and working clandestinely somewhere underneath so quick are the upshifts. The turbos could be more reactive at the bottom end, sure, but once the revs climb up they go ballistic.

There’s a level of insularity and quality evident in the RS5 that’s very hard to match. In an era where brands are making grilles large enough to accidentally swallow jaywalkers, the RS5 and its very similar-looking sibling the S5 (also, quite a looker) are walking the fine line between sculptural and ostentatious. Especially on the inside, where you find one of the most well-appointed and plush looking cockpits. There are small flourishes which add such a qualitative touch. Like the metallic carbon-fibre band running across the dashboard. Or the fresh set of RS logos and badges you get on the seat, centre console and the steering. And speaking of the steering, you now get a dedicated ‘RS’ button on the spoke, with two switchable modes that you’ll find impossible to resist despite the clear warning that the mode is designed exclusively for track driving.

Apart from that there are all the trappings of a contemporary European luxury car. Massaging seats, Alcantara swathes on the door handles and a panoramic sunroof are once again accompanied by Audi’s proprietary Virtual Cockpit and MMI system running in top form.

What does it do best?

The most appealing attribute of the RS5 Sportback is its seamless blend of everyday practicality and performance. Granted that is the role of pretty much any power-sedan but most tend to err on the side of thrill seeking more than the perennially sober Audi. No silly ‘drift modes’ or ‘rear-wheel drive only’ switches for the Audi. Its Drive Select system allows you to essentially switch between ‘fast and comfortable’ or ‘fast and slightly less comfortable’ aka Dynamic mode. That said,  Quattro can direct additional levels of torque to the rear wheels when needed (85 percent of it, as it turns out)

The RS5’s practicality, of course, is enhanced considerably due to its 4.8-metre long frame accommodating an estate-like notchback boot with plenty of storage space for a golf set or six (with the rear seats folded). Audi has ensured that the driving enthusiast’s exhortations haven’t gone completely unheeded. The rear-biased differential, mixed with a marginally more communicative steering makes the RS5 a fair bit of fun around the bends. For its ability to haul ass like a much lighter, more compact performance car, the Audi RS5 Sportback and the Audi engineers who built it, deserve applause.

At Rs 1.04 crore (ex-showroom) could the RS5 Sportback be a bit more well-equipped? (Wireless charging, cooled seats and wireless Apple CarPlay continue to be glaringly absent) Absolutely. Could the power have been distributed a little more evenly across the band? Yep. But for a comfy and unfailingly safe voyage into high performance, the RS5 Sportback, with its strong mid-range and top-end performance, sensational looks and more enthusiast-friendly attributes, is a sure bet.