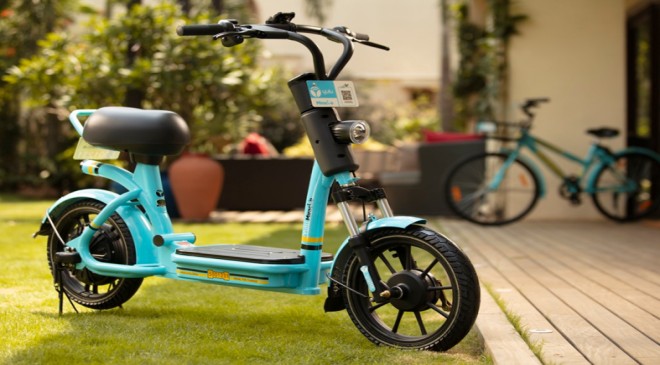 If you have lived in Delhi, Mumbai or Bengaluru, you may have noticed people riding around in tiny blue bikes across the city. Well, that’s Yulu and you will be able to own these by next year. Till now, you could take it for a ride on rent.

Amit Gupta, the chief executive officer and founder of Yulu Bikes, is currently toying with the idea of adding more revenue streams to their existing shared economy business model and finally making an entry into the personal mobility space. It is important to note that Yulu had also introduced a longer rental plan last year so that gig workers like delivery partners for brands like Zomato, Swiggy and Dunzo could use these vehicles for delivery.

As a part of its latest plan, the company will have three revenue sources by next year. First, the existing Yulu-owned and operated shared mobility model where people can pick up these electric bikes from nearest public points for short or longer term. Second, the same model is handled by third-party franchise partners. Third, Yulu bike that people could own, just like scooters.

The three-year-old company plans to expand its presence to 10 Tier 1 and metro cities, and add 100,000 Yuku Bikes to its fleet. The company believes that these cities would have a business potential of $26 billion.

The company plans to sell a more upgraded version of the existing bikes — Yulu Dex and Yulu Miracle — for both personal and last-mile mobility with a fourth-generation battery built on the platform developed by Bajaj Auto, an investor in the company. All new vehicles — Yulu Express and another product for personal use — will be designed and manufactured by Bajaj and will be 100% made in India, Gupta claimed.

“The cuteness of the product is not going to go away… We will also add a basket and a backseat so that people carry stuff,” Gupta told Business Insider, while emphasising that the bikes would cost less than a regular scooter and save cost of fuel too. The most important aspect of these bikes is that they are low-speed vehicles operating under 25 kilometre per hour, therefore, do not require a driving licence.

Yulu targets people who don’t have driving licences and need a second vehicle to cover short distances like going to a nearby store, dropping kids to school or going to coaching centres and more.

Gupta — who previously co-founded InMobi, India’s first billion dollar startup — noted that he always wanted Yulu to become a personal vehicle, but that wasn’t possible without setting up a proper charging and battery exchange infrastructure in place.

The company spent the last three years focusing on only three markets so that they could enhance their charging infrastructure at the backend. The company recently achieved more than 3 million battery swaps till date through its ‘Max Network’. With expansion of fleet and new cities, it expects three million swaps a month by the end of December.

The company — backed by 3One4 Capital, Wavemaker Partners, Rocketship and others — is currently in talks with investors to close a $100 million funding round, which will be a mix of equity and debt. The company says that the capital will go into its mobility-as-a-service model, and not in the franchise or personal mobility model as it requires “significantly” less capital from the company’s side.