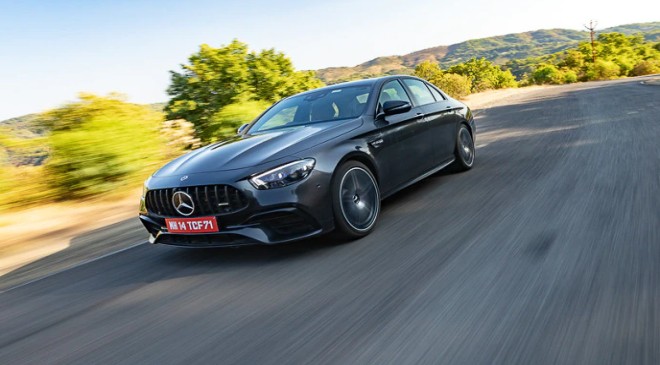 A 4-litre twin-turbo V8, four-wheel drivetrain, and a bunch of hairpins….do I really need to say more?

A date that will remain forever etched in my mind. After all, it was my fanboy moment with an AMG! The facelifted Mercedes-AMG E 63 S 4MATIC+.

My heart started thumping as soon I lay my eyes on the performance sedan. And all four of us just had to go for a spin in this beauty.

Since our shoot location was on the outskirts of Pune, we were lucky (or maybe not) to have our way littered with hairpin turns. Why not so lucky? I mean, who wouldn’t want a straight, open patch of tarmac to hit those high speeds when you’re in an AMG!

I was seated in the rear seat, and even though the drive was exhilarating, the stiffer ride quality (and the curves along the way) had me moving around a bit. I had my phone in my hands, trying to shoot to the best of my ability while we occasionally kept tackling corners at speeds of mostly over 60kmph. While there are, of course, those shaky shots, I was surprised to see the overall stability, really, despite the oft-serpentine patch we were on.

I didn’t check, but my pulse was surely beating over 120bpm. There I was, sitting in a Merc powered by a 4-litre twin-turbo V8, making a mad 612PS and 850Nm! On top of it, there’s the 9-speed automatic and a four-wheel drive (4MATIC+, it’s in the name), making it all the more special. Plus, all the different drive modes: Comfort, Sport, Sport+, and Race.

Now, about its performance from nought to 100kmph. As per the carmaker, it takes 3.4 seconds to cover this run. Although we didn’t challenge it, we did try launching it, and it almost reached the triple-digit figure. The sweet exhaust note was music to our ears, but it’s only when you step on the gas harder that you start wanting more of that sound.

The supportive seats did their best to hold me in one place. Mercedes has provided the E 63 S with AMG-specific upholstery finished in a tan shade. Thankfully, you also get grab handles on all four doors to hold on to when it hits those brain-scrambling speeds.

We came back from the approximately 10-15 minute drive, and it was now time to explore the vehicle from close quarters. Although I didn’t get to be behind the wheel, I did get to experience the front seats. They are power-adjustable and also come with heating and ventilation functions. The E 63 S even comes with an AMG dual-spoke steering wheel (as seen on new and premium Mercedes-Benz models) along with AMG-specific graphics in the dual 10.25-inch displays (running Mercedes’ MBUX software).

Mercedes has priced the E 63 S 4MATIC+ at Rs 1.73 crore (ex-showroom pan-India). While its rival, the BMW M5, does have a larger-capacity engine, quicker acceleration, and even an all-wheel drivetrain, the Merc’s almost neck and neck with the Bimmer. But after having experienced a madhouse like this, I am certain of one thing — you get what you expect from a Mercedes-Benz performance sedan. And now, I can only hope for more such rides and maybe, get to push one to its limits one day!