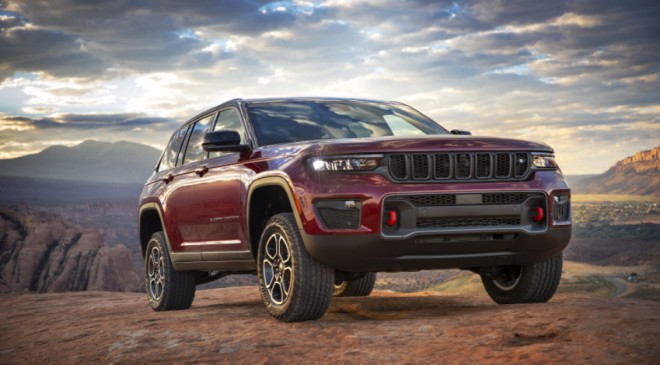 New Jeep Grand Cherokee SUV will be assembled in India; to launch later this year.

Jeep has begun road-testing the all-new, Grand Cherokee SUV in India. A heavily disguised mule of the Jeep Grand Cherokee SUV was recently spotted near Kodaikanal by our reader Elangovan Ramasamy. The model will be locally assembled and will go on sale later this year, after the launch of the Compass-based Jeep Meridian SUV.

Jeep Grand Cherokee: what do we know so far?

Jeep recently confirmed the latest-gen Grand Cherokee for India, after the earlier model went off the shelf more than a year ago. The new Grand Cherokee, for the first time, will be assembled in India and will be Jeep’s fourth locally assembled model, following in the footsteps of the Wrangler, Compass and the upcoming Meridian three-row SUV.

While the Jeep Grand Cherokee is available in two sizes overseas, India will get the standard 5-seat variant and not the longer three-row Grand Cherokee L. Jeep has also confirmed that India will be the first market outside North America to have the SUV locally assembled.

The new Jeep Grand Cherokee has fresh styling and is more in line with its newer models like the flagship Wagoneer. It also has a few styling cues that are similar to the upcoming Jeep Meridian for India. On the inside, it gets multiple displays on the dashboard, including a large 10.1-inch central touchscreen, a digital instrument screen, and a dedicated touchscreen in front of the co-driver. Jeep has confirmed that the India-spec car will receive this third dashboard-mounted display. Additionally, the Grand Cherokee will also come with a panoramic sunroof, leather upholstery, ventilated front seats, a head-up display, and a powered tailgate, among others.

While the previous Grand Cherokee was available with both petrol and diesel engines, the new SUV will be a petrol-only model. Jeep has not revealed engine outputs but has confirmed that the SUV will use a 2.0-litre turbo-petrol engine paired with an 8-speed automatic gearbox as standard. The new Grand Cherokee come with four-wheel drive with selectable terrain modes – Auto, Sport, Mud/Sand, and Snow. The Grand Cherokee will go up against luxury SUVs such as the Mercedes GLE, BMW X5 and the Land Rover Discovery in India.

While the market launch of the Grand Cherokee is still some time away, Jeep will launch the long-awaited Meridian in India by mid-2022.