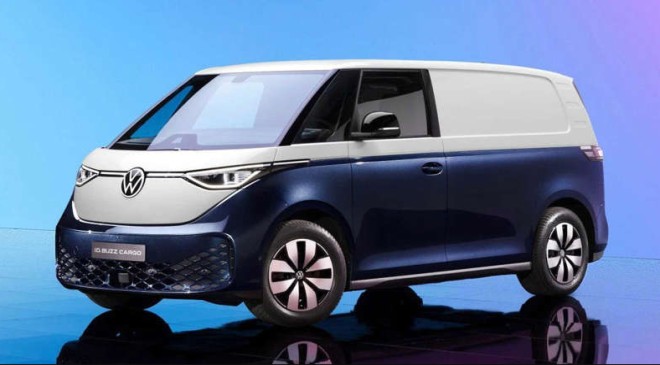 After years of anticipation and hype the Volkswagen ID Buzz is finally here in production form. Several variants will be available, but initially a short wheelbase 5-seater passenger version will launch alongside the Cargo model shown above. Both will go on sale in Europe later this year, however those in the US chasing after a Buzz will have to wait a little longer. Why? Because neither version will reach American shores.

The short wheelbase passenger Buzz has been ignored in favor of a long wheelbase 7/8-seater model for the American market. It won’t go on sale until 2024 however. Meanwhile a California version, which should be the production Buzz that’s closest to the 2017 Concept, will arrive in 2025.

VW has no plans to sell the ID Buzz Cargo in the US, either in SWB or LWB guise (only a SWB version is confirmed for now anyway). The reason behind this decision is the Chicken Tax.  Simply put, it’s a 25% tariff on light trucks that are made outside of America. As a commercial van the Cargo falls into this category, meanwhile all Buzz models will be produced in Hannover, Germany. Hence the Cargo would be very expensive if it was sold in the US, making it an unviable option for VW.

The Cargo offers 137.7 cubic feet of space, enough for two European-sized pallets. The version revealed last week features a 77 kWh, 204 bhp battery pack. A smaller 58 kWh battery can be found on the 5-seater ID Buzz Pure. Both batteries are shared with other ID models. Although not confirmed, numerous reports are suggesting the LWB Buzz destined for the US will feature a much larger battery, around 100 kWh in size.

Exact range figures for the Buzz are yet to be given, but the 58 kWh pack should be good for up to 200 miles per charge meanwhile Buzz’s equipped with the 77 kWh battery should potentially manage around 250 miles per charge. A larger pack for the LWB Buzz could see that figure pushed to over 300 miles, but we’ll have to wait and see.