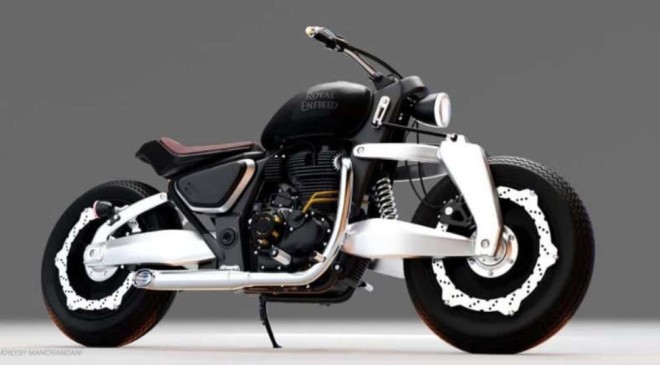 Royal Enfield bikes are used in many projects in India because of its historical legacy, fan base, simple architecture, and ability to be easily repaired.  We have seen some remarkable modifications to the Classic 350 and 500 not only in India, but also beyond our borders.

Today, we have a digital representation of a Royal Enfield Meteor 350 recreated as a futuristic bobber by digital artist Akhilesh Manchandani. See what changes are made to the RE Meteor 350 to give it this futuristic look.

From the front, a stunning front suspension system with two levers is seen in the bike’s digital render, as well as a unique steering mechanism. In addition, the handlebars appear higher and closer to the seat.

Carbon fibre finish appears to be used on the fuel tank and there is a unique single seat with the remainder of the tail section removed. Moreover, the rear swingarm appears to be larger, as it is also custom-made.

Also custom-designed are the side panels, which feature integrated vents and a coolant-coated injector cover, which matches the engine. Finally, the taillight is mounted on the right rear swingarm, a feature that gives the bike an attractive style.

Additionally, the bike has two thick tyres mounted on carbon-fibre wheels, and it has a single disc brake on both ends. Meteor 350 is powered by an all-new 349 CC single-cylinder, four-stroke, SOHC engine which produces peak power of 20.2 BHP and 27 Nm peak torque. Royal Enfield Meteor 350 is priced at Rs 2.01 lakh (ex-showroom)