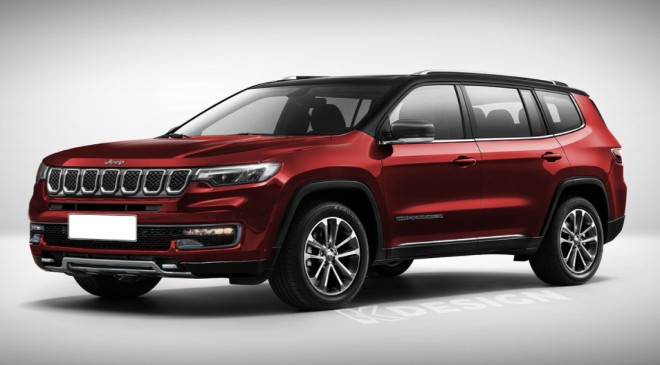 Three-row Jeep Meridian will rival the Kodiaq, Fortuner and the Gloster in India.

Jeep India will finally take the covers off its next important product, the Meridan SUV, on March 29, 2022. The new Jeep Meridian will go on sale in May this year, and is one of multiple new launches from Jeep slated for 2022.

Jeep Meridan: what do we know so far

The Jeep Meridian for India’s styling bits will be similar to the Jeep Commander, but with a few unique touches. The SUV will get a three-row cabin and is 4769 mm longer than the standard Compass, with which it shares its underpinnings.

While the India-spec Jeep Meridian is yet to be revealed in full, it will have plenty of styling cues taken from the new Grand Cherokee, just like the Commander sold overseas. These will include more rectangular headlights, restyled front and rear bumper, an upright tailgate and slimmer tail-lamps. These changes will also help the three-row SUV distinguish itself from the two-row Compass.

Expect features like a 10.1-inch touchscreen system with wireless Apple CarPlay and Android Auto support, a 10.25-inch digital instrument cluster, electrically adjustable driver and passenger seats, ventilated front seats, a wireless phone charger and a panoramic sunroof. While the Commander sold in Brazil only gets a seven-seat layout, we expect the India-bound Meridian to come with a six-seater cabin as well.

On the safety front, we expect the Meridian to come with seven airbags, adaptive cruise control, automatic emergency braking system, and, perhaps, even ADAS features.

Under the hood, the Meridian will come with the tried and tested 2.0-litre, four-cylinder Multijet turbo-diesel engine – used in a number of SUVs in India – and also come paired to a 9-speed automatic gearbox. A petrol version is expected to join a little later. Key rivals to the Meridian will include the  recently updated Skoda Kodiaq, but it will also potentially take on some of the body-on-frame SUVs like the Toyota Fortuner and MG Gloster.

Apart from the Meridian, Jeep will also launch the new Grand Cherokee SUV later this year. Read more on that here.