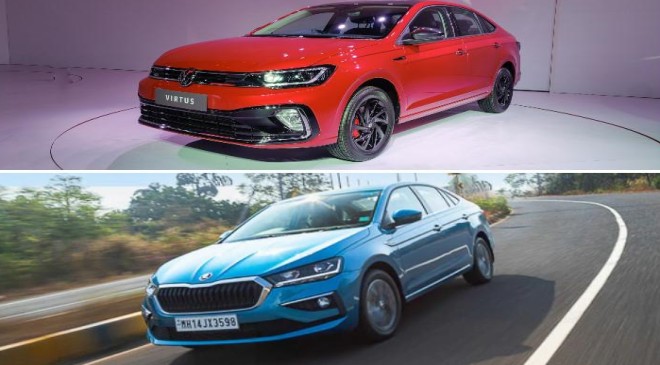 The two European sedans share the same platform and powertrains, but that’s where the similarities stop

Gearheads have a soft spot for Euro sedans. But before 2022, your only choices were aging models that felt like a compromise against rivals such as the Honda City and Hyundai Verna. The upcoming Volkswagen Virtus, we expect, will bring some enthusiasm back into the sedan segment with its potent turbo petrol engines, extensive safety and comfort features and jaw-dropping looks.

The Virtus shares its platform and much of its hardware with the Skoda Slavia, and here’s how the two sedans compare with each other on paper.

Volkswagen has knocked it out of the park with the Virtus’ styling. It draws comparisons to the Jetta with its front and rear fascias and low-slung stance. The Slavia, on the other hand, takes inspiration from the Octavia.

The Virtus gets an extra helping of chrome for its exterior. It has thick chrome bezels on the front and rear bumpers, chrome on the front grille, and chrome elements within the headlamp housings. It makes the Slavia seem restrained in its plushness, in comparison. If you want your sub-Rs 20 lakh car to stand out, the Virtus should be ideal for you.

Unless you see them side by side, you can’t tell how closely the Virtus and Slavia size up against each other, so here’s a handy table of their dimensions:

Under the skin, the two sedans have the same underpinnings: the MQB A0 IN platform. It gives the Virtus and Slavia spacious interiors and large 521-litre boots. The Virtus is 20mm longer than the Slavia, but its width and height are identical to the Skoda.

You’ll be able to get the Volkswagen Virtus in a Performance Line GT variant, limited to the 1.5-litre TSI engine, that adds several sporty exterior features such as a contrast black roof, ‘Razor Black’ gloss-black alloy wheels, a subtle boot spoiler and red brake callipers! We must add that Volkswagen has used the GT tag on point as you can tell your friends you own a Rs 20 lakh VW.

Sadly, the Skoda Slavia’1.5-litre TSI variants get none of the design cues to make it stand out next to the regular 1-litre TSI-powered Slavia. That said, we hope a sportier looking trim is introduced later down the line. Probably a Monte Carlo or vRS? Fingers crossed.

You’ll get the option of six paint shades to choose from on the VW Virtus: Candy White, Reflex Silver, Carbon Steel Grey (a darker metallic grey), and Wild Cherry Red. It’ll get a new Rising Blue Metallic colour and even a Curcuma Yellow that’ll set it apart from other sedans in the segment.

Skoda gives you similar white and grey shades on the Slavia, but you can get it in a bright Tornado Red or Crystal Blue.

The interiors of the two sedans are just as dissimilar as their exteriors. In the Virtus, you get the new VW family flat-bottom steering wheel and a dashboard that’s slightly tilted towards the driver. The dashboard is gloss black with a thick silver trim surround that extends to the doors.

If you opt for the GT trim level, the Virtus has its own unique cues on the inside, too. The dash surround is red (might be a bit gaudy for a handful of people), and the stitching on the black leatherette seats is red, too. You even get aluminium pedals and paddle shifters in the automatic variant!

In comparison, the Slavia 1.5 TSI gets no cues to differentiate itself from the regular 1-litre TSI variant. But that’s not to say that the Slavia’s cabin doesn’t feel any less special. The classy 2-spoke steering wheel feels high quality to touch, while the copper coloured insert running through the width of the dashboard looks classy. The infotainment system is also a floating unit in contrast to the Virtus’ inset touchscreen.

The Virtus has a VW Play 10.1-inch touchscreen, while the Slavia has a similarly sized Skoda Play floating infotainment display. Both touchscreens have wireless Android Auto and Apple CarPlay and come paired with an 8-speaker in-house sound system. But the Slavia has a subwoofer that you won’t get on the Virtus.

Both sedans will come with six airbags, stability control (ESC), multi-collision braking, hill-hold assist and automatic headlamps and wipers. They each get rear parking sensors and a reversing camera with static guidelines.

Under the bonnet, the two sedans are powered by similar VW Group engines. The 1-litre TSI turbo petrol engine paired with a 6-speed manual gearbox is the standard powertrain on offer. The Virtus Performance Line variants will be powered by the larger 1.5-litre TSI engine that’s also offered on the Slavia. The bigger engine gets active cylinder deactivation technology that shuts off two of the cylinders while cruising to save fuel. It’s more powerful than the engines offered in the Virtus and Slavia’s rivals.

While VW will offer a sporty trim from day one, you’ll have to wait for the Slavia to get a racier avatar. We could see the Monte Carlo trim level reintroduced in the Skoda sedan, and that could put it head to head with the Virtus GT. Speaking of, we could see more differences arise between the Virtus and Slavia after the Virtus’ first drive review. Stick around for the review and future on-road comparisons between the two sedans.