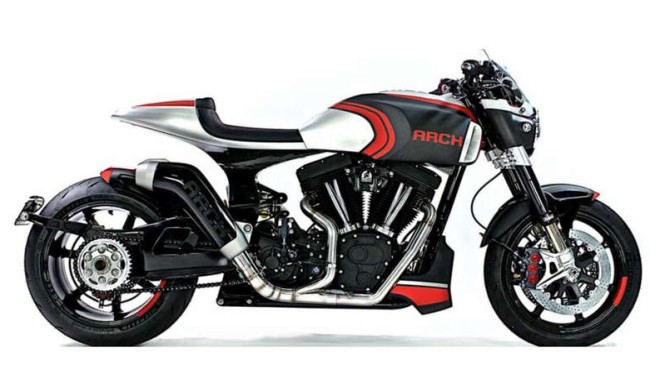 Arch’s second production model is five years in the making.

Arch Motorcycle has made a name for itself with bespoke designs, big-bore V-twins, even bigger price tags. Back at EICMA 2017, the California-based brand presented its KRGT-1 production model, Method 143 prototype, and Arch’s second production bike—the 1s. After five years in development, Arch is ready to take the sporty new cruiser to the production line.

The 2017 1s concept featured mid-controls, aerodynamic bodywork, a single-sided swingarm, and a model-specific up-swept exhaust. Those components remain, but Arch fills in the rest of the details with a full spec sheet. S&S Cycle still supplies the 124ci (2,032cc), 45-degree V-twin, but Arch now reports that the two-liter mill pumps out 115.3 lb-ft of torque.

The 1s tames all that torque with dual six-piston, radially-mounted, monobloc, ISR calipers mated to twin rotors at the front. The rear braking system is no slouch either, with a four-piston ISR binder biting down on a floating disc. Bosch ABS governs both ends, ensuring that the multi-pot calipers don’t overwhelm the 120/70-17 and 240/45-17 Michelin Power RS tires.

Arch’s 1s is more than a straight-line speedster though. The firm outfits the tubular steel frame with a CNC-machined aluminum subframe and a single-sided billet aluminum swingarm. The front end comes equipped with the fully-adjustable Öhlins fork found on Arch’s KGRT-1 model and the rear benefits from a fully-adjustable Öhlins shock with oil reservoir and hydraulic pre-load adjustment.

Falling in line with the 1s’ sporty ambitions, the 17-inch BST carbon fiber wheelset replaces the KGRT-1’s 19-inch front and 18-inch rear BST carbon fiber wheels. Similarly, the 1s sheds 33 pounds off the KGRT’s wet weight, with the new model tipping the scales at 563 pounds. A 4.5-gallon fuel tank adds a touch of practicality to all that performance, but the 1s remains Euro 4-compliant, which may limit its availability.

As always, Arch will deck out the 1s with carbon fiber and customers will be able to customize the sporty cruiser. Still, as the 1s enters production, the company hasn’t listed the model’s MSRP or its availability just yet.