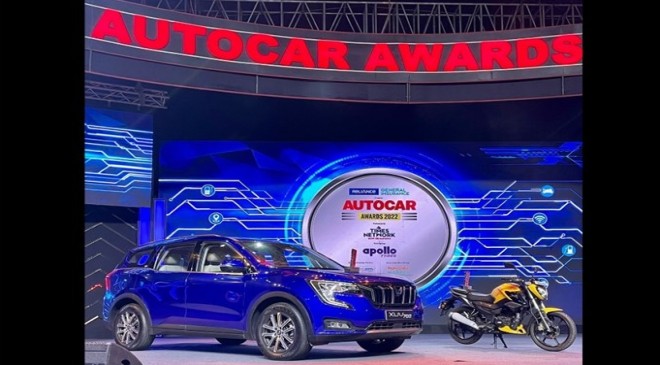 Mahindra’s XUV700 has just been announced as the Car of the Year at the 2022 Autocar Awards, while the TVS Raider was adjudged Bike of the Year. The XUV700 beat out competitors like the new Maruti Celerio, MG Astor and its segment rival, the Tata Safari, to win the top award. The Mahindra impressed the jury with its modern and tech-driven cabin, best-in-class engine options and lengthy features list. The Mahindra, which has seen tremendous sales success so far, was also declared the winner of the Value for Money Car of the Year and Executive SUV of the Year awards.

The 2022 Bike of the Year, the TVS Raider wowed the panel with its striking looks, punchy engine and value-for-money proposition. Meanwhile, Yamaha’s Aerox 155 is the Scooter of the Year for 2022, standing out for its unique and sporty looks and the performance it offers from its R15-derived engine. The 2022 Premium Bike of the Year was won by the triple-cylinder Triumph Trident 660 while the Import Bike of the Year was awarded to the superb and versatile Ducati Multistrada V4 S.

Even though styling is a subjective matter, our jury could agree that the funky new Citroen C5 Aircross was a deserving winner of the Best Design and Styling Award. Jeep’s Compass received a mid-cycle facelift last year, bringing with it a completely overhauled interior and more modern features that considerably up the premium quotient. The American SUV was declared the Car Variant of the Year for 2022.

Mercedes’ new-gen S-Class, much like its predecessors, moves the goalposts further in terms of technology and luxury and was hence adjudged the Luxury Sedan of the Year. At the opposite end of the spectrum, Renault’s Kiger was awarded the Compact SUV of the Year, standing out for its design and practical cabin. The Volkswagen Taigun is the Midsize SUV of the Year for 2022, narrowly beating its counterpart from Skoda, the Kushaq. Our panel was impressed by the VW’s strong engines, build quality and driving mannerisms.

Back to the two-wheelers, the 2022 Bike Variant of the Year was the Hero Xpulse 200 4V. The Xpulse gained improved performance, thanks to the new four-valve set-up, and gained new graphics with the update. Meanwhile, the Performance Bike of the Year award went to the legendary Suzuki Hayabusa. The new-gen bike was deemed to be an improvement over its predecessor in almost every manner.

On to the industry, the 2022 Person of the Year was Venu Srinivasan, the Chairman of TVS Motor Company, while the coveted Manufacturer of the Year award went to Tata Motors. Here’s the full list of all the winners:

Value for Money Car of the Year – Mahindra XUV700

Scooter of the Year – Yamaha Aerox 155

Manufacturer of the Year – Tata Motors