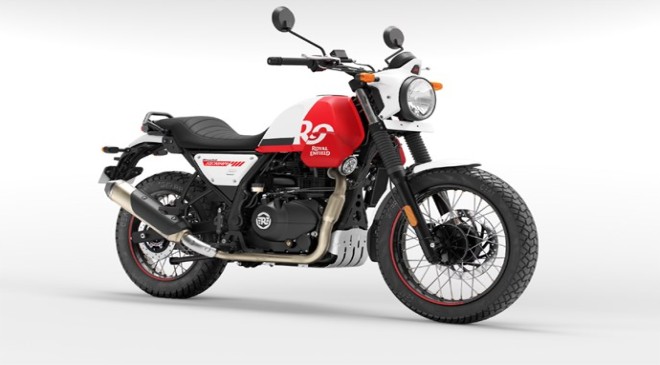 The Scram 411 is a more accessible version of the Royal Enfield Himalayan.

Royal Enfield has launched the new Scram 411, essentially a stripped-back Himalayan, in India at Rs 2.03 lakh. The prices go up to Rs 2.08 lakh, depending on the colour. There are some interesting changes under the skin, and we take a look at them here.

To begin with, there are a number of visual elements that distinguish the Scram 411 and the Himalayan. The headlight is set lower and further in, the bulky fuel tank frame from the Himalayan is replaced by two small side panels, and the seat is a new single-piece unit. The tail section has been tweaked with a smaller grab handle and a different number plate and indicator. Other visual differences are seen in the seven new colour schemes.

The Scram 411 gets an instrument console that looks similar to the one on the Meteor 350, albeit with a different colour treatment. The Royal Enfield Tripper navigation screen is an optional extra. While the Scram 411 misses out on a tachometer, the glaring omission is in the button to switch off rear ABS.

The Scram 411 utilises the same chassis as the Himalayan’s, down to the headstock angle and the rear subframe. However, the bike gets a smaller, 19-inch front wheel and the front suspension also has 10mm less travel. The rear shock has the same spring rate and 180mm travel as the Himalayan, although the damping has been changed. The shift to a smaller wheel has also led to a sharper steering angle and a slightly shorter wheelbase.

In terms of ergonomics, the handlebar is wide as the Himalayan, but it has been repositioned to sit lower and closer to the rider. The seat height has dropped by 5mm and the overall ground clearance is also down by 20mm to 200mm. This should make the Scram 411 a little more accessible for shorter riders.

Bookings for the Scram 411 have opened and deliveries are expected to begin shortly. In terms of competition, the bike goes up against the recently launched Yezdi Scrambler.