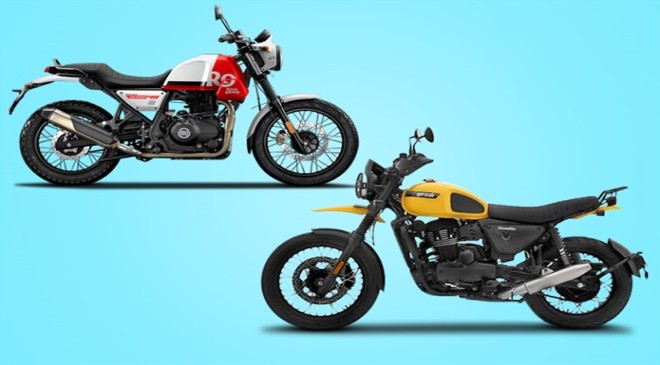 The Royal Enfield Scram 411 and Yezdi Scrambler are aimed at a similar set of customers, and we tell you how they fare on paper.

There couldn’t have been a better time for those who like scrambler-style motorcycles, especially in the 300cc-500cc space. And both Classic Legends’ Yezdi and Royal Enfield have recently launched new offerings to capitalise on this growing demand in the market.

Scramblers, by principle, are meant to be lighter, stripped-down versions of existing motorcycles that are bolstered to take the road less travelled.

Yezdi was the first to take a stab at the segment with its Scrambler. The bike gets the Perak’s 29.1hp, 28.2Nm, 334cc engine mated to a 6-speed gearbox, and has a very authentic scrambler look – round tank, bright colours, long-travel suspension, ribbed seat and block-pattern tyres. The Scrambler is also arguably the most compelling of the three bikes in the recently launched Yezdi range. You can check out our review of it here.

However, Royal Enfield has now entered the fray with the Scram 411. This is a derivative of the Himalayan, but is lighter by 5kg, which is in keeping with the entire scrambler ethos. The Scram differs from the regular Himalayan in terms of appearance, and more importantly, the smaller front wheel. This should afford the Scram a lighter and more agile on-road personality. Check out our review of the Royal Enfield Scram 411 here.

The Yezdi comes with a telescopic fork at the front and twin-shock absorbers at the rear, whereas the Scram gets a 41mm front fork and a monoshock at the rear.

In terms of accessibility, both motorcycles have similar seat heights – 795mm for the Scram and 800mm for the Scrambler. Ground clearance is identical, too, at 200mm. Both the Yezdi and the Royal Enfield would likely enter a single bike garage, and, as such, need to be somewhat capable on long tours as well. The Yezdi gets a 12.5-litre fuel tank, while the Scram gets the 15-litre tank from the Himalayan.

The Yezdi Scrambler also does not get Bluetooth connectivity or navigation (they are available exclusively on the range-topping Adventure), but the Scram gets the Tripper navigation as an optional extra.

Royal Enfield Scram 411 vs Yezdi Scrambler: Which one to buy?

Scramblers, as a genre of motorcycles, have a distinct aesthetic appeal, and while looks are subjective, there is a case to be made that the Yezdi is closer to that silhouette. The Scram looks just like what it is – a stripped-down Himalayan – and, hence, if you like that, you’ll like this just fine. Both motorcycles also come in a plethora of colours to further accentuate the visual appeal.

One serious point of contention, however, is that the RE Scram’s components have achieved a certain level of refinement and smoothness that only years of development can afford. The Yezdi Scrambler, on the other hand, is a fresh new product from a relatively new company, and, as such, has to deal with issues that are common to newer companies.