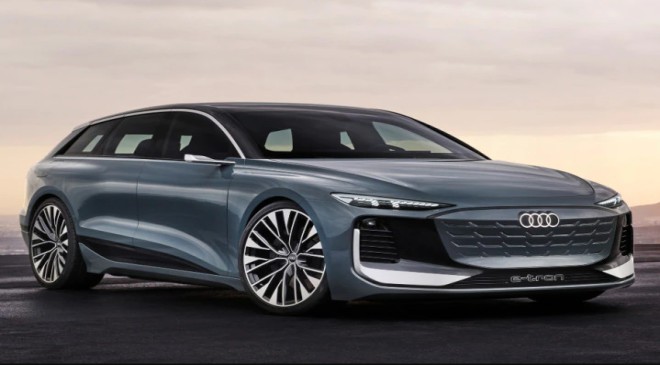 And in typical Audi fashion, it also pushes the boundary in lighting technology

This is the Audi A6 e-tron Avant concept, the estate version of the all-electric A6 e-tron concept that broke cover at the 2021 Auto Shanghai Motor Show. A cheeky part of us hopes to see the RS version of this Avant, but that’s a story for another day.

So, let’s get back to the topic at hand, the A6 e-tron Avant. Head-on, the A6 e-tron Avant looks ditto to the sedan, but it’s the side profile that matters a lot: we feel Audi has done a blooming good job of integrating the estate body. The roofline nicely slopes down to an upright tailgate, which gets sharp cuts and connected LED tail lamps. Sharply styled diffusers add to the sporty touch of the rear profile.

What also improves the overall design nicely is the large 22-inch dual-tone alloy wheels and short overhangs, giving it tighter proportions and stance. That said, like a typical estate, the A6 e-tron Avant is slightly higher than its sedan concept. However, the ride height is still low enough and that improves aerodynamic efficiency, which is rated at 0.24cD.

In typical Audi fashion, lighting has been given utmost importance and there’s plenty of tech wizardry going on here. The sleek LED headlights not only greet you with projections on the wall, but you can use them to play games while the car is charging or stationary. Projectors are mounted on all four corners of the vehicles and the projector flashes a warning to other road users when you are about to open the door.

As seen in recent Audis like the Q5, the A6 e-tron Avant features OLED tail lamps through which you can change the light signatures. But, in the concept, Audi has taken the game forward with 3D elements that gives it a much more immersive look at night.

The A6 e-tron Avant concept will be an electric-only offering. So it gets two powertrains on each axle, putting out a combined output of 476PS and 800Nm. Audi says the standard versions will be able to do 0-100kmph in less than seven seconds, while that numbers go down below four seconds in a performance variant.

Battery duties are taken care of by a 100kWh unit, helping the electric estate do around 700km on a single charge. With an 800V architecture and 270kW charging speeds support, it can top up from 5 to 80 percent in just 25 minutes.

The Audi A6 e-tron Avant is expected to be unveiled in production form sometime next year. Right now, this will be an unique model as rival manufacturers are yet to display their next-gen electric estate. But we bet Mercedes and BMW will be having their eyes focussed on this one.