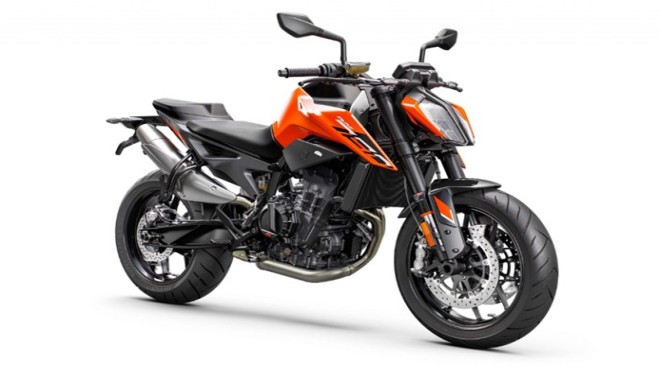 In a surprising move, KTM has decided to re-launch the 790 Duke globally as a 2022 model. The Austrian marque will be introducing it in the European market first, with bikes arriving in dealerships June onwards.

The 2022 KTM 790 Duke receives fresh livery and colours; however, it continues with the same design as that of the KTM 890 Duke. In fact, Team Orange has made no changes to the 799cc LC8 parallel-twin engine apart from making it Euro5-compliant. It continues to make 106.4PS and 87Nm (a slight bump in performance over the older model). However, a detuned (A2 license requirement) 95PS model will be available.

The electronic package of the Scalpel, consisting of cornering ABS and traction control and three ride modes, is the same as the previous model. KTM has also added some optional equipment to the package like a bi-directional quickshifter, Track mode, cruise control, tyre pressure monitor and KTM My Ride Bluetooth connectivity module.

So, with the KTM 890 Duke in the picture, do we really need the 790 Duke? After all, the Scalpel was replaced by the 899cc Super Scalpel for a reason, right? Well, KTM says that there are still buyers for what the 790 has to offer, and it will sit between the 390 Duke and the 890 Duke. But does 10PS actually make that much of a difference? We think there’s more to the 790 Duke’s comeback than that.

KTM has already commenced testing the 990 Duke, which is expected to replace the 890 Duke models and make around 25PS to 30PS more (in the top ‘R’ trim). This puts the 990 Duke in the league of the Ducati Streetfighter V2. And that is exactly where the 790 Duke would fit in, as an affordable mid-displacement alternative to compete with the likes of the Triumph Street Triple.