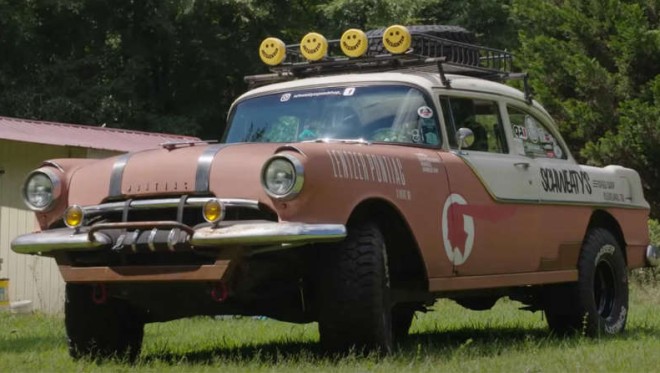 It wears 33-inch tires and fog lights bought from Kmart in 1975.

Restoring an old car to its former glory helps preserve it. Automakers have produced billions of vehicles, many of which will end up in the scrap heap, and only a handful will remain. However, some old cars are beyond restoring but not so far gone to warrant a death sentence. That’s what Shawn did, buying an abandoned 1955 Pontiac for $500 and turning it into a rad-looking off-roader. 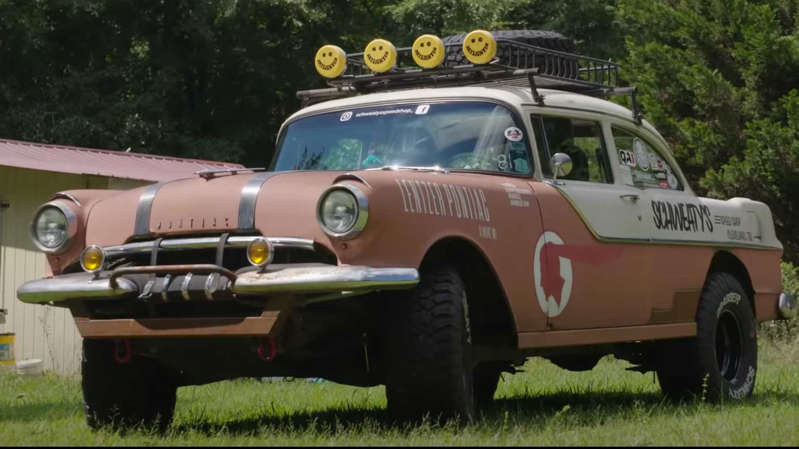 The Pontiac’s raised ride height comes via a new chassis borrowed from a 2000 Chevy S-10 pickup. The two have similar dimensions. The Pontiac wasn’t famous for its superb suspension or braking capabilities, so the modern truck chassis provided those comforts. Shawn built the car over a year with his wife and son, which required a lot of work. He bought the car in a terrible condition, with a lot of rust and much of the chrome long gone. It had a borked engine and seized brakes, too.

A 5.3-liter V8 engine from a Chevy pickup resides in the Pontiac, which pairs with a four-speed automatic gearbox. Inside, the Pontiac retained its original dash and steering wheel, though Shawn added cup holders and a fire extinguisher. At the front, the Pontiac wears a pair of fog lights Shawn’s father bought in 1975 when he worked at Kmart. The car sports KC lights across the roof, perched in front of a roof rack, but they’re not used much. They look neat, though, and that’s the whole point of the build. The 33-inch tires help sell the off-road aesthetic.

“I like to build cars that are outside the norm,” Shawn says early in the video. “I’m not really interested in building cars that are going to command a lot of money or attention on the show stage.”

Many design decisions were necessary, like the leather straps on the lower hood. It doesn’t have a secondary latch, and the straps help keep it secured. Much of the fort-end design is there to replace the missing chrome and rusted-out bits. The project cost $5,000.

The car looks a bit like a rat rod – it spots a “Please Do Not Tow” sticker just in case – but the raised ride height gives it a lot more character. It can cruise the highway or navigate some off-road terrain with ease while drawing all sorts of attention.