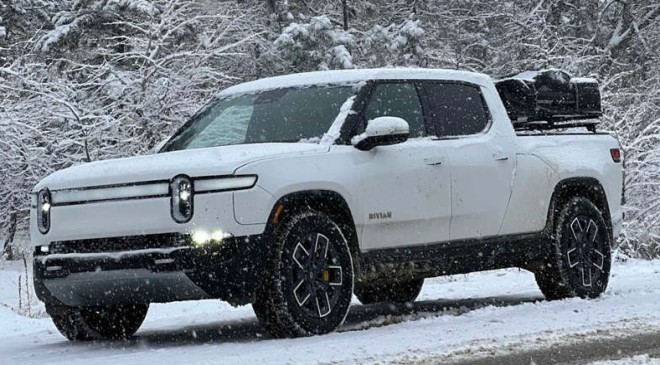 Out of Spec Reviews’ Kyle Conner tests the R1T’s winter worthiness on several types of roads all the way up to deep snow.

We’ve seen quite a few videos showing how good the Rivian R1T electric pickup is at handling snowy conditions. However, it was never properly tested in snow to gauge its winter worthiness on several different types of roads, which is what Kyle Conner from Out of Spec Reviews did for this video.

Kyle begins by driving his R1T tester or paved roads that had been cleaned of snow, or were lightly covered, and remarks that it feels extremely grippy and surefooted even around turns. The vehicle was on the standard-fit Pirelli all terrain winter tires that are specially designed for the R1T, and even though they look fairly aggressive and off-road-oriented, they work well on the road too, making the truck reassuringly surefooted in slippery conditions.

He also tries changing between the driving modes, which shuffle power between the front and rear wheels differently, in order to see what effect that has. As he finds roads that have actual snow on them, the R1T becomes a very controllable and forgiving sideways machine. It’s actually pretty easy to control once it does go sideways, a testament to its sound engineering, the all important low center of gravity and even weight distribution between the two axles.

Other reviews had already praised the R1T for its remarkable handling given that it is still a big and heavy pickup truck. With stability control off on a road completely covered with snow, Kyle was impressed by the vehicle’s balance – it’s not daunting to slide a Rivian around and, in fact, when it’s safe to do so, you can actually have quite a lot of fun in one.

Further on in the video, Kyle takes the R1T on narrower country roads with even more snow, and as you’ve seen in other videos showing the truck’s performance in these conditions, it just cruised through seemingly with very little effort. The overall impression after the snow drive was an overwhelmingly positive and Kyle even recommends what his best settings for certain situations are.