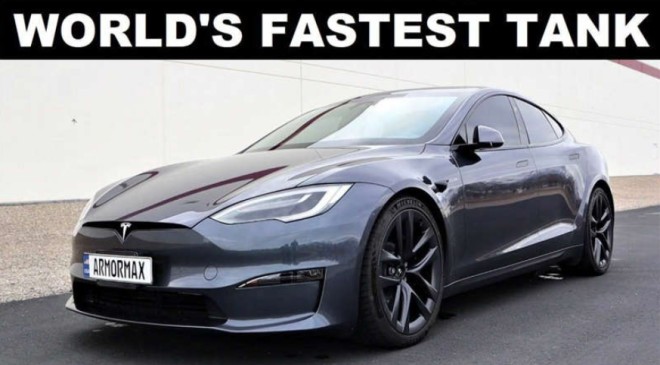 Concerned 1020 hp alone won’t be enough to get you out of a sticky situation? Look no further.

Ever wondered how a 1020 hp Model S Plaid would perform when covered in armor? Us neither, but regardless we now have an answer thanks to Armormax. Taking a stock Model S Plaid, the specialist firm added bulletproof windows as well as reinforced struts and body panels throughout.

You wouldn’t be able to tell the car was armored at first glance, however taking a look inside reveals thick windows and various other minor giveaways. The doors themselves are also heavier, unsurprisingly, however they are still easy to open and close.

YouTuber Ben Hardy was given a chance to take the armored Plaid for a drive, and found performance was barely impacted by the extra weight. Autopilot worked as usual too.

All in all, around 300 lbs (136 kg) of armor was added. Considering the Plaid weighs 4828 lbs (2189 kg) to begin with, that’s not a lot in the grand scheme of things. Hence Ben concluded that he couldn’t tell the difference between the armored Plaid and the regular version.

So, how much would it set you back to coat your Plaid in bullet-resistant armor? Well, according to Armormax prices vary depending on individual specification, although their website states the average package costs around $60,000 on top of the price of the vehicle. Therefore the Plaid in the video is probably worth at least $200,000.