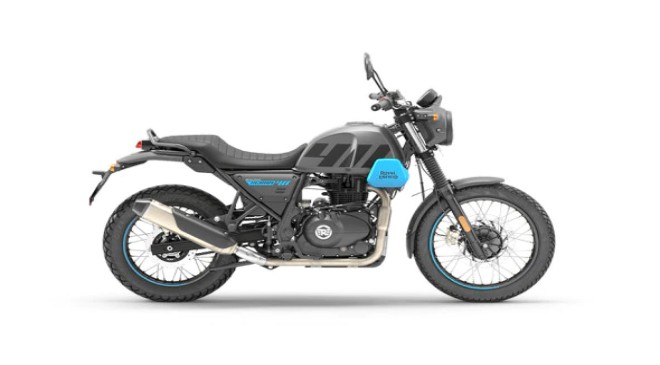 Royal Enfield has launched the much-awaited Scram 411 in India at Rs 2,03,895 (ex-showroom Delhi) onwards. Read our launch story to know more about the features, specifications and availability.

The Royal Enfield Scram 411 is powered by the same long-stroke 411cc air-cooled single-cylinder engine making 24.3PS at 6500rpm and 32Nm at 4250rpm from the Himalayan. This engine is mated to a 5-speed gearbox. The Royal Enfield Scram 411 is suspended on a 41mm telescopic fork with 190mm travel (10mm less than the Himalayan’s) up front, and a rear linked monoshock with 180mm wheel travel. The bike rolls on a smaller 19-inch front spoke wheel wrapped with a meatier 100-section block pattern tyre whereas the rear gets the same 17-inch wheel with 120-section rubber as the Himalayan. The scram 411 weighs 185kg dry, including the optional centre stand, making it 5kg lighter than the Himalayan.

The Royal Enfield Scram 411 is available in a single variant only. RE has priced the Graphite Yellow, Graphite Red and the Graphite Blue at Rs 2,03,085. The Blazing Black and Skyline Blue have a price tag of Rs 2,04,921 whereas the White Flame and Silver Spirit will set you back by Rs 2,08,593, all ex-showroom Delhi.

The Royal Enfield Scram will be based on the Himalayan. The bikemaker has given it a few design touches to make it slightly off-road-friendly, including serrated pegs and a high-mounted exhaust, without compromising its highway capabilities. So, instead of the Himalayan’s 21/17-inch setup, it comes with a 19/17-inch setup.

The Royal Enfield Scram will be a direct competitor to the Yezdi Scrambler and the Yezdi Adventure, while also rivalling the Husqvarna Svartpilen 250 and Honda CB350RS.