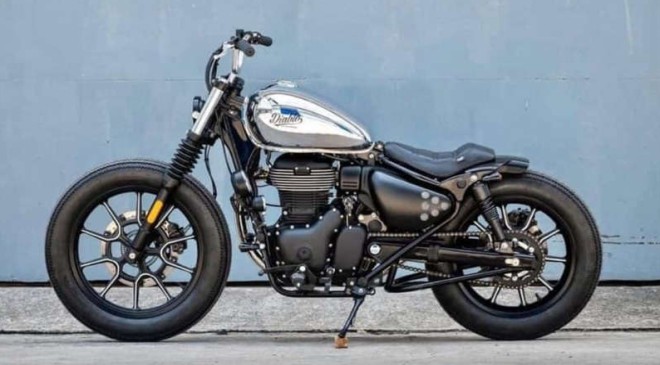 The Meteor 350 motorcycle was introduced by Royal Enfield in November 2020 in India, and the motorcycle has since been sold internationally. Because of their rich heritage, large fan following, and simple architecture, Royal Enfield motorcycles are a popular choice for many projects both in India and abroad.

One example of how Meteor 350s are becoming popular among customizers not only in India, but also in Japan is this modified Royal Enfield Meteor 350 from K-Speed, a motorcycle customization shop in Thailand.

The instrument cluster has been moved from the original location to the left side of the tank, while the fuel tank still has the teardrop design, but is now chrome. A chrome handle bar has been installed to replace the stock handle on this motorcycle. Most of the panels have also been removed.

The rear tail section has been sawed off in a large area, causing the aftermarket rear turn signals to be mounted close to the rear shock absorbers. In addition to alloy wheels, stock tyres have been replaced by chubby balloon tyres at both ends to improve grip and comfort.

Whether there were any changes to the engine performance or not is unknown. The Royal Enfield Meteor is powered by a 349cc single cylinder, air-oil cooled engine which makes 20.4 PS of power and 27 Nm of torque.  The engine is mated to a constant mesh 5-speed transmission. Royal Enfield Meteor 350 is priced at Rs 2.01 lakh (ex-showroom).