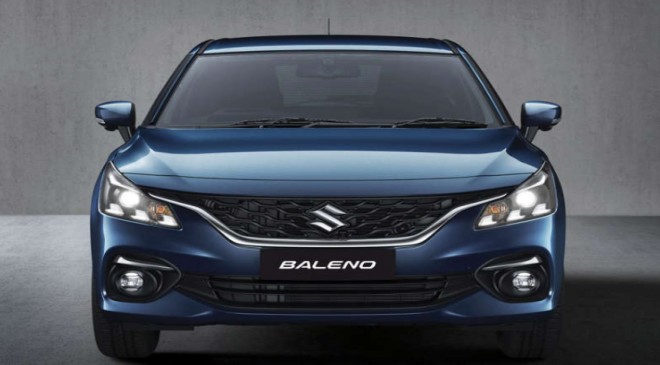 The 2022 Maruti Suzuki Baleno comes with a couple of segment-first features and plenty of updates, both on the inside and outside. Other than that, Maruti Suzuki has given significant cosmetic treatment to the Baleno both outside and inside as well. Just so you know, Maruti Suzuki had bought back the Baleno as a hatchback in 2015. It earlier existed as a sedan and was a replacement for the Maruti Suzuki Esteem.

On the exterior of the car, the new Baleno has been given a wider honeycomb pattern grille in the front. Below the grille, there is a brushed silver strip that extends to the headlights giving the car a sleeker look. The headlights are given a wraparound design and appear wider at the base than the older Baleno. The car will get a new three-element LED DRL signature while projector units will be installed for lightning across all ranges.

The manufacturer has also made some changes to the bonnet which has been made a bit flat while the front bumper has also been given larger fog lamps housings. At the rear of the vehicle, new C-shaped LED tail-lights are seen that are extended onto the tailgate. The updated Baleno is the first Nexa car that features this new design language. Going forward, other MSI products are expected to come with similar updates. In terms of safety, the Baleno facelift comes with up to six airbags.

Coming to the interiors of the car, Maruti Suzuki has brought significant changes there too. The dashboard has been made to look more stylish with a new three-layer design. The dashboard design has black on top, a silver line running in the middle and then a dark blue finishing in the lower section. The company has also added rear-ac vents, a sliding armrest and fast charging ports at the rear.

Apart from the cosmetic changes, some features have also been loaded in the new Baleno. A free-standing 9-inch touchscreen infotainment system has been given at the centre of the dashboard along with a new steering wheel. Other additions also include a new automatic climate control switchgear and a fresh design for the instrument cluster. MSI has also provided the Baleno with two first-in-segment features – a heads-up display and a 360-degree camera.

The Baleno 2022 facelift gets only one engine option which is a 1.2-litre engine named K12N. Maruti Suzuki’s Baleno new engine has variable valve timing and an integrated starter generator (ISG) which helps save fuel. Power figures stand at 90hp and 113Nm of torque. It comes mated to either a five-speed manual or five-speed AMT, rather than the CVT unit provided earlier. As far as the fuel economy is concerned, the five-speed manual provides a figure of 22.3 km/l, while the AMT clocks in at 22.9 km/l. Furthermore, the 2022 Baleno is available in five colour options.