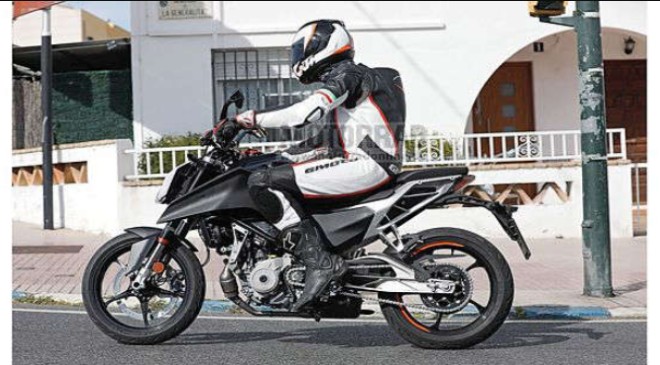 From the picture, it is clear that the new 125 Duke will be radically different from the current model. The overall styling, cycle parts, and even the performance are expected to be much better than the current model.

The test mule was spotted with a trellis frame, however, the engine was sitting on aluminium mounting. The subframe, too, gets cast aluminium treatment. The current model has a trellis subframe. Interestingly, the five-spoke wheels look quite good on the prototype. In fact, the production model may see the same unit. The suspension that was seen on the motorcycle was from WP. But there’s no information on its adjustability.

The 125cc engine will be liquid-cooled, as we can see in these pictures, but only time will tell if the power figures will be more than the current model. The gearbox, too, is expected to be better and revised. Other bits like a slipper clutch and dual-channel ABS are likely to come standard.

We can expect the new KTM 125 Duke to debut at the 2022 EICMA but the India launch can happen only in early 2023. The prices are expected to be more than the current model, but it could be the same at the time of launch and Bajaj may increase it as time passes.