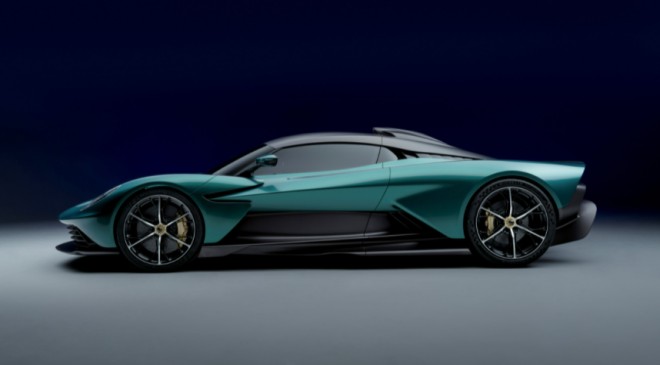 Touting it as the fastest and fiercest car yet, British luxury car manufacturer Aston Martin has unveiled the last ever Aston Martin V12 Vantage. In terms of appearance, Aston Martin has made the new V12 40 mm wider than the regular Vantage. This is believed to have done to improve the cornering ability of the car while also enhancing the stability, as reported by Top Gear.

In addition, a new full-width front splitter will help generate more downforce and make the car more aerodynamic. The car is now equipped with a unique diffuser that sits under the rear wing and adds to the improved aerodynamics. Reportedly, the diffuser can effectively offer a downforce of 204 kg when the car is at 322 kmph.

The V12 Vantage gets 21-inch alloy wheels while the grille in the front has also been made bigger. The bonnet gets a new horseshoe design and the new front bumper shares a feature with the one on the previous generation V12 Vantage.

Under the hood, the Aston Martin V12 Vantage has a 12-cylinder petrol engine that can produce 700 PS of power and 753 Nm of torque. The engine mounted in the front has been matched to a rear-mid mounted eight– speed automatic transmission.

With this much power, Aston Martin claims that the car can clock 100 kmph in just 3.5 seconds. The car has been made lighter with the use of carbon fibre in seats and bonnet while lighter carpets and steel body panels have also helped reduce the weight. However, the car still happens to be 67 to 110 kg heavier than the stock V8 Vantage.

The new luxury sports car not only boasts immense power but a host of features too. Aston Martin has equipped it with features like electronically operate seats and steering columns, heated seats, Alcantara upholstery and dual-zone climate control. Other features also include an 8-inch infotainment screen and Apple device integration and navigation that can be paired with a premium audio system of Aston Martin.

The safety has been enhanced by equipping the V12 Vantage with a blind-spot detection feature, 360-degree camera, tyre pressure monitoring system and an autonomous parking system as well.

With this, Aston Martin has launched its last fossil-fuel car and is now investing in the development of electric vehicles. Notably, the British automaker will manufacture only 333 units of the V12 Vantage globally with the bookings already closed due to high demand.