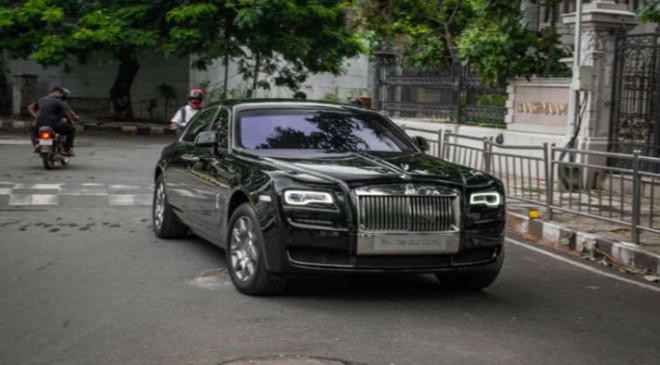 South star Dhanush, who was last seen in Maaran, occupied a spot on the list of trends since Friday after pictures of his Rolls-Royce Ghost surfaced on the Internet. The actor had bought the luxury car in 2015 when he had imported the Rolls-Royce Ghost from England for a whopping ₹2.15 crore. After featuring in headlines for not paying a part of entry tax for his car last, the actor has become the talk of the town again, the courtesy of the first glimpse of his luxury car.

Earlier this month, a user named Ajay Sharan posted pictures of Dhanush’s Rolls-Royce Ghost Series 2 ruling the roads of Chennai. The photos have now gone viral on social media. In the pictures, the luxe model can be seen running on roads, overshadowing other vehicles around it.

Check out the pictures of Dhanush’s Rolls-Royce Ghost:

In the comments section, fans of the superstar, who won a National Award last year, expressed their excitement. “Great car, love it,” wrote a user while others dropped the fire icon for the Rolls Royce.

Rolls-Royce Ghost Series 2 comes with an amazing interior, as well as exterior specs. It runs on a 6.6-litre twin-turbocharged V12 petrol engine which is capable of producing 563 bhp of max power and peak torque of 780 Nm. And like other Rolls-Royce, the Ghost Series 2’s cabin is opulent inside, with everything made from quality materials.

As compared to the first Ghost model, the front and rear bumpers were redone and magnified for Series 2, which has a length of 5399 mm and a width of 1948 mm.

Its last recorded showroom price is Rs 4.6 crore. Rolls-Royce has already launched the second generation of Ghost in the Indian market and it comes at approx. Rs. 7 crore ex-showroom.

Last year, Dhanush received a court rap after he challenged Entry Tax on the import of Rolls-Royce Ghost Series 2. The judge handling the case even pulled him up for knocking at the doors of the judiciary for a possible relief when lesser earning people always pay their taxes.