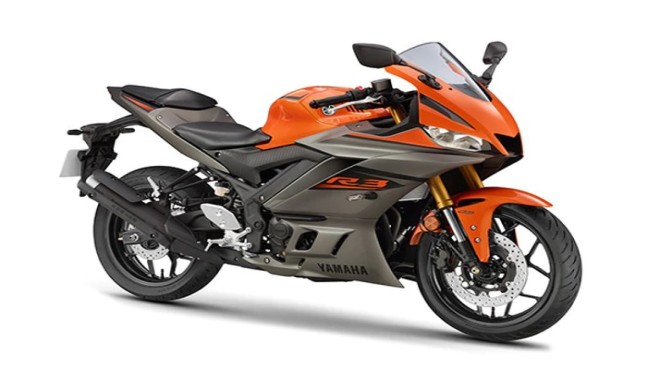 Gets a new paint scheme and slight cosmetic upgrades

Yamaha has updated its 300cc supersport motorcycle, the YZF-R3, for 2022 in Taiwan at an insane asking price of TWD 2,70,000 (around Rs 7.2 lakh). The updated bike gets a new orange colour scheme along with slight cosmetic changes.

First off, the bike gets a refreshing new paint scheme called Vivid Orange. It sports a dual tone tangy orange colour complemented by a Metallic Grey shade on the fairing and the rear. Additionally, it sports a vibrant ‘R3’ on the sides in the orange colour. The supersport is also available in Midnight Black and Racing Blue paint schemes, which were available on the previous model as well; however, they do get a tweaked livery. The new orange colour option replaces the previously available teal colour variant.

The YZF-R3 also features new LED bulb indicators, replacing the bulb ones, and weighs 170kg – 1kg less than the outgoing one. The supersport is powered by the same reliable and powerful 321cc, parallel-twin liquid-cooled engine, churning out the same 41PS but this time around it puts out 0.98Nm more. Everything else on the bike remains unchanged.

With Blue Square flagship dealerships set up in many parts of India, we can expect the Japanese bikemaker to finally bring back the YZF-R3 to our shores sometime later this year.

With a price tag of Rs 7 lakh, the YZF-R3 is immensely expensive; almost at the same price as the Triumph Trident 660 in India. The price may be appropriate for the Taiwanese economy, but it is really expensive for what essentially is a 300cc supersport. The YZF-R3 goes up against the likes of Kawasaki Ninja 300, TVS Apache RR310 and the KTM RC 390.