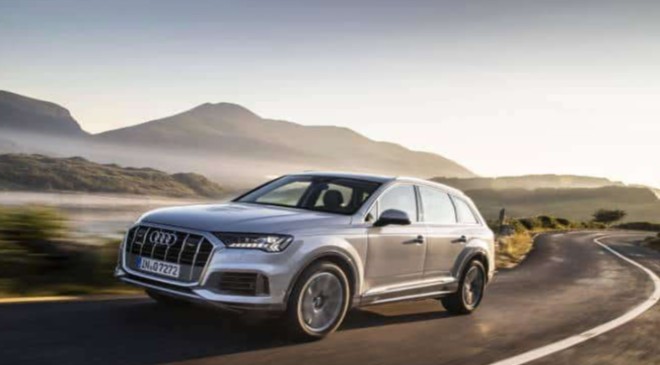 Despite its absence from the Indian roads for two years, the Q7 isn’t an uncommon sight, particularly on vast expressways where it manages to successfully jettison its bulk and turn into one of the fastest rectangular projectiles in the market. The 2022 model marks the long-awaited return of the formerly ubiquitous Q7, Audi having significantly trimmed the fat on what was a large, imposing sports utility vehicle (SUV).

The new model is decidedly more streamlined than any other previous iteration of the Q7. It still oozes presence on the roads, but its form is now taut with an arrow-straight roofline, a narrower greenhouse and a more shredded physique. Upfront, you get Audi’s new visual trademark – the large, chrome-lined octagonal grille – with more sharp-edged Matrix LED headlamps flanking it. The side-inlet design on the front bumpers is also reworked, along with the side skirts and a few token changes at the back. Large 19-inch alloys complete the list of visual changes on the outside and while this might still look like an estate on stilts, the Audi Q7 is still a 5-metre-long SUV with a proper three-row seating and proprietary Quattro AWD tech. It’s handsome enough, but given that it enters a far more competitive marketplace, Audi could benefit from offering it in a more exciting range of colours, not unlike the ones reserved for its stunning RS-powered cars.

On the inside, everything changes. This is about as contemporary and cutting-edge as present-gen Audis get with multiple screens, ambient lighting options and Audi’s best-in-class “Virtual Cockpit” system at the driver’s and front passenger’s disposal.

Large windows, a panoramic sunroof and an unobtrusive dash combine to make the Q7 feel incredibly airy. Everything is made of top-shelf materials and is ergonomic to boot although the absence of wireless Apple CarPlay in this day and age – especially for a car in this price bracket – is practically unheard of. Still, it’s not without its points of interest. Namely the 3D parking cameras, which, once again, beat those offered by the competition. And that crisp 19-speaker Bang & Olufsen sound system. There’s also an auto park feature that adequately steers the car into a parking spot.

The Bharat Stage-VI-compliant Q7 now is now available in a petrol variant only, with Audi’s formidable V6 TDI unit having been sacrificed at the altar of emission-friendly mobility. The move is in keeping with parent group Volkswagen AG’s petrol-only approach when it comes to the Indian market, and is cause for lament for the many admirers the 3.0-litre V6 TDI had aquired over the years. Still, the new Q7 brings plenty of promise and is a more enhanced, efficient and robust version of its former self, now equipped with state-of-the-art multimedia functions, lighter bodywork and a very potent petrol motor.

The most remarkable aspect of the Q7 isn’t just how agile the chassis feels. Even with the ride height lowered all the way, this still is a large SUV and reminds you of it in the way it leans into corners. But the way it manages to maintain traction while steadily gathering speed is where the appeal of the Audi Q7 lies. At some point you simply stop realising that you’re in a full-sized, three-row SUV.

The petrol V6, while lacking the explosive torque delivery of the diesel variant, is buttery smooth. Until you mash the throttle, its mild-mannered nature doesn’t even give you a hint of the power it contains. And with 340hp on tap, power is plentiful, as is 500 Nm of torque. Once the initial turbo-lag is out of the way, the engine simply digs its heels in and goes on a tarmac munching spree. It’s not RS-level explosive, of course, but it’s more than sufficient for a quick getaway. Audi’s Drive Select system remains unchanged, and in Dynamic, the Q7 is quite the performer. Not that anyone will or should buy it for its linear performance. The Q7 is a soft-roader par excellence, and makes no attempt to be anything else.

The 2022 Audi Q7 finds itself in a very different world than the one inhabited by its predecessors. The competition is now even more aggressive, indeed cars like the GLE come with an extensive waiting period, indicating that demand in this segment is higher than ever. With prices starting at Rs 79.99 lakh going all the way to Rs 88.83 lakh, the Q7 is well-placed to take on the competition. Everything about this car is peak Audi – it feels unfailingly safe, immensely capable with massive towing capacity and some of the best safety and multimedia functions that only top-shelf German R&D can provide.

If it has a flaw, it’s that the Q7 can be accused of being a tad vanilla, lacking in part the testosterone and pizazz that’s been injected into other SUVs, including the very sexy Audi Q8. With the much larger Q6 on the way, the Q7 is unlikely to remain Audi’s flagship SUV. But that doesn’t take away the fact that whatever the Q7 does, it does it exceedingly well.