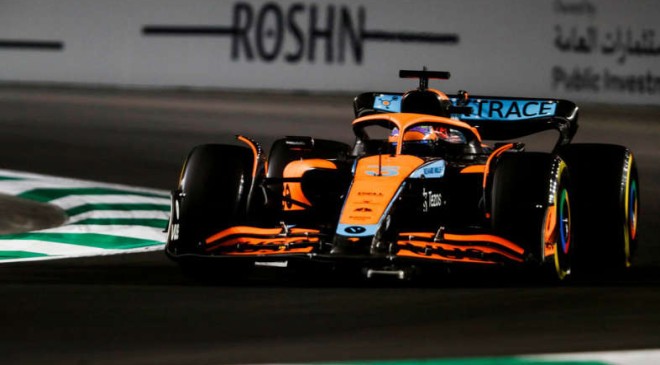 After encountering brake problems in Bahrain testing, McLaren had to divert its resources into coming up with a solution prior to last weekend’s race.

While that was accomplished successfully with a revised front brake duct design, the effort meant that McLaren was, along with Haas, one of only two teams formally to declare to the FIA that it has brought no upgraded parts to Saudi Arabia.

Although other teams have switched rear wing specs for Jeddah, McLaren has kept the wing that was used in Bahrain.

The McLarens were at the bottom of the speed trap figures on Friday, although intriguingly Lando Norris was seventh fastest in FP2 over a full lap, suggestion that the team may have found a more competitive set-up for the Jeddah weekend.

Seidl admitted that efforts to address the brake duct issue have had an ongoing impact.

“Let’s say the team was very, very busy to fully focus on this mission,” he said. “Which took a lot of capacity away for doing in parallel other things as well, which is obviously a bit of a compromise.

“At the same time, I think with parts we have in the pipeline, which we have.

“They are due to that reason not ready yet, or not really a step forward for this specific track here. And we’re happy with for example, the rear wing we have in place which we used in Bahrain to use it also for here.”

“I think we had a decent start. We had a good session with no big problems really. I guess everyone was a bit surprised about the high grip we have seen today from the first run onwards, I think I saw some other radio comments as well from other teams.

“Again, I think there was not any specific issue with the car. In terms of competitiveness, we need to see if this track here actually suits our car a bit better and is more in line for example, what we have seen was in Barcelona at the first test for our car, and if we can be more competitive at the same time.

“I don’t expect any big miracles for here again, we simply miss aerodynamic load on the car. And it’s not so straightforward to get to the level where our competitors are.”

Asked if the MCL36 had a fundamental problem Seidl said: “To be honest, it’s still part of the hard work that is ongoing at home.

“I think the car is working. There’s not a specific problem, when you listen to the comments also from the drivers, in terms of balance. So I think we have a healthy platform. It’s just overall grip missing.

“It will take time, so we need to be patient as well. But again, I’m very confident with the team in place back home with all the work everyone is putting in now, that we’ll strike back.”