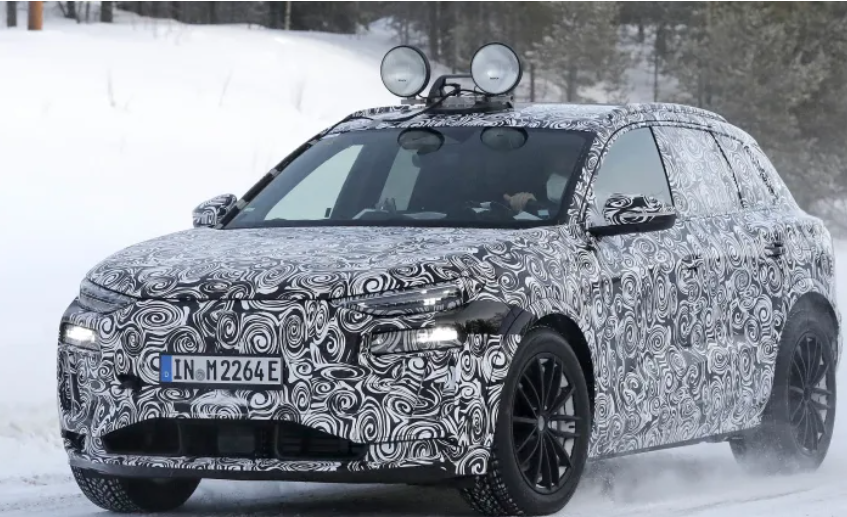 This will be the range-topping performance variant of the upcoming Q6 E-Tron, the Porsche Macan EV’s sister vehicle.

Just like with the Audi E-Tron GT, which gets an RS version that’s comparable to the Porsche Taycan Turbo, the upcoming Q6 E-Tron crossover will get a similar variant. It will most likely be similar in terms of performance to the Turbo version of the upcoming Porsche Macan EV, with which it shares its Premium Platform Electric (PPE) underpinnings.

Our spies have sent us several batches of photos showing camouflaged Q6 E-Tron prototypes, but this one is special. It shows the RS Q6 E-Tron cold weather testing in northern Europe alongside several camouflaged (probably non-RS) prototypes, as well as a BMW iX, which we presume is there as some kind of benchmark.

How do our spies know that this Q6 E-Tron is the hot one, even if it’s mostly hidden by camouflage? Well, the front bumper has an aggressive lower opening with some very RS-like intakes (which appear to have active shutters that on this tester were closed; this is different to previous prototypes that we’ve seen).

Probably the biggest giveaway, though, have to be the red-painted brake callipers. The rotors aren’t the biggest – and they certainly look small for an RS model that is rumored to have upward of 600 horsepower – but since it is an EV, the RS Q6 E-Tron will also rely on regenerative braking to bring itself to a stop, even when driven spiritedly.

There will surely be more visual differentiation between RS and non-RS models, but it may just be small trim changes and badging. The wheels on RS models will also surely be different (bigger and sportier looking) and we’re sure the ones on this prototype are just placeholders used for testing purposes.

We believe the Audi Q6 E-Tron will debut sometime this year, but the RS model will probably join the range some months later.