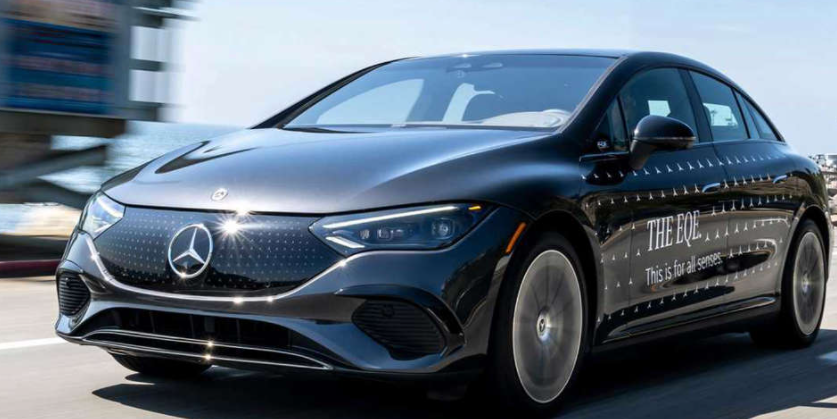 The Mercedes-Benz EQE is one of three all-electric vehicles coming to the German automakers’ US lineup this year. It’s got the panache and pizzazz of the larger EQS sedan, but in a smaller, roughly CLS-sized package. While the EQS may be the brand’s electric flagship, EQE proves smaller can be beautiful.

I accepted an invitation to see this “business sedan” in person in beautiful Santa Monica, California and go for a ride-along. Also included in the program was an opportunity to experience the brand’s first tentative step into level 3 automated driving called Drive Pilot, and a deep dive into the company’s electric future as personified by the EQXX concept, which was also on hand.

If you’re familiar with the Mercedes EQS, you would have no problem picking out an EQE in a parking lot, as they both wear the same slippery exterior styling. Somehow, though, the proportions seem to work better on the more compact vehicle. Just a smidge less wide and 0.8 inches lower, the big differentiator is the overall length. At 194.7 inches, the EQE is just over a foot shorter than its sibling sedan. The subtraction appears to take place in equal measure from the front, passenger cabin, and rear of the vehicle. With the wheelbase losing just 3.5 inches, the impact on cabin space is rather minimal.

Plunk yourself down in the passenger seat of the EQE, you’d be hard pressed to distinguish it from EQS, with which it shares the EVA2 platform. It features the same cocooning design, with a console that extends from the armrest to the dash, identical switchgear and turbine-style air vents.

Plunk yourself down in the passenger seat of the EQE, you’d be hard pressed to distinguish it from EQS.

The rear-wheel-drive EQE 350+ we rode in had the same MBUX Hyperscreen option that can be had in EQS. Stretching across the entire dash of the vehicle, it integrates three separate screens: a 12.3-inch driver’s display, a 17.7-inch center touchscreen, and a 12.3-inch touchscreen for the front passenger.

Interestingly, the passenger screen will play movies or other content while the vehicle is under way, but the sound only comes through a set of headphones. If the driver is tempted to watch, the glances would need to be brief. If the camera monitoring the driver’s eyes and head movements catch them looking over more than two seconds, the screen will go dark.

The route for our ride took us past sandy Santa Monica beaches and crumbling cliffs, but there was hardly time to enjoy the scenery. With Mercedes Vice President Electric Vehicle Architecture Christoph Starzynski, as wheelman, our attention was focused on the facts and figures that flowed from his lips.

After breaking down the power options of various EQ offerings – the EQE 350+ offers 288 horsepower and 391 pound-feet of peak torque, by the way – he got into nerdy regenerative braking details. Unless you have regenerative braking deceleration turned off, when you lift off the accelerator, the electric motors will slow the car according to which mode you’ve selected via the paddles behind the steering wheel: D+, D, or D-.

Oh, and for for the record, the EQE can also offer a true one-pedal driving experience. That’s something seasoned EV drivers tend to clamor for.

When you feel the need to slow more quickly, pressing on the brake pedal will increase the level of regenerative braking until at some point the physical brakes join in. Even in glide mode, with zero amount of regen activated, it will engage regenerative braking with application of the brake pedal. Oh, and for for the record, it can also offer a true one-pedal driving experience. That’s something seasoned EV drivers tend to clamor for.

We left the coastal highway after a number of miles and tackled some tight and twisty neighborhood streets. With its shorter wheelbase and 4.5 degrees of rear-axle steering, the EQE seemed plenty nimble. This configuration has a 38-foot turning circle, according to Mercedes’ factsheet.

Stabs of the accelerator – performed to demonstrate the synthetic sounds which are mapped to power output, called Silver Waves and Vivid Flux – didn’t produce violent head-snapping levels of thrust, but with a 5.6-second zero-to-sixty and instant torque, it’s hardly sloth-like.

Though my EQE wasn’t equipped with the optional air suspension and adaptive damping needed for the highest levels of smoothness, the ride felt comfortable enough for this class of vehicle. To its credit, the Mercedes didn’t seemed betrayed by the heft of a huge 90.6-kWh (usable) battery beneath its floor. Or, at least not to the same degree as the EQS, with its 108-kWh (usable) energy pack.

This more compact version of a Mercedes electric sedan should certainly live up to the experience offered by the EQS.

That battery, though smaller, can still take the EQE a great distance. On the European WLTP cycle, it’s rated for 410 miles. EPA expectations have yet to be released, but they will almost certainly boast a smaller number. Of course, any range prediction is just that. But we would not be surprised to see it drive for 350 miles or so under real world conditions.

There is, of course, only so much you can tell about a car’s driving dynamics from the passenger seat, so we look forward to the opportunity to get behind the wheel and properly put the EQE through its paces. At first blush, though, this more compact version of a Mercedes electric sedan should certainly live up to the experience offered by the EQS. Maybe even surpass it in some respects.

Mercedes was eager to have us experience its first step into the world of SAE level 3 automated driving. Mercedes brands its version of the Advanced Driver Assistance System (ADAS) feature “Drive Pilot,” but it might for the moment be better thought of as Traffic Jam Assist, as it’s limited by both location and vehicle speed.

For this demonstration, we left the electric world behind us and jumped into the passenger seat of a Mercedes S-Class development vehicle, it’s trunk filled with equipment to collect the data gathered from its forays on the freeways. From the outside it looked like a production vehicle, but the data output displayed on the center screen and its steering with with extra buttons integrated into its rim told as different story.

The automaker has already received certification in Germany for the system and hope to have approval in California soon. If that happens, We may see the system become an option as soon as the end of this year in the US.

Under the right conditions – being on a divided highway at speeds below 40 miles per hour – Drive Pilot will let you know it’s available. Press the button at the 10:00 position on the steering wheel and the car takes over driving responsibilities and provides what Mercedes says is the ultimate luxury: time.

With the car in control, you can take your hands off the wheel and your eyes from the road and pull up content on the center screen that may have been restricted before, such as a web browser. If the system needs you to take control back, it gives an audible signal and end browser functionality.

In our limited time, we found it to work well within its admittedly narrow scope. It did, at one point, seem shy about moving alongside a tractor trailer that it found uncomfortably close to its lane lines, erring on the side of caution and slowing.

A far different approach to the open-world model that Tesla is pursuing, Drive Pilot is still a solid first step that the automaker will slowly expand upon with safety as its guiding principle. After all, it assumes liability with level 3, so the company is understandably cautious.

With EQE on the production horizon and features like Drive Pilot close to on-road reality, Mercedes is charging at full speed to an increasingly interesting synthesis of tech and luxury.