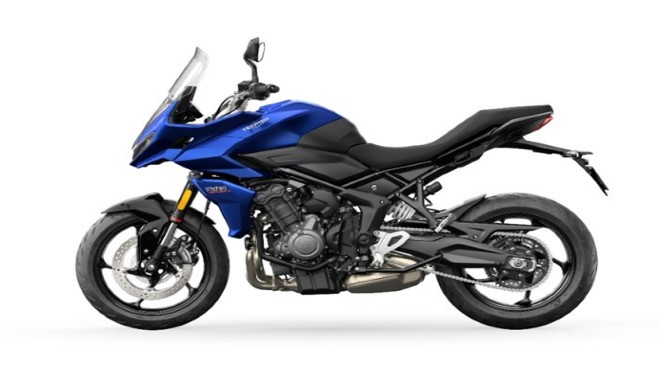 – Will be the most affordable Tiger model in India

Triumph Motorcycles India will update its portfolio with the launch of the Tiger Sport 660 tomorrow. This new member of the Tiger family will replace the Tiger Sport 850 as the entry-level product in the British brand’s adventure tourer portfolio and compete against the likes of Kawasaki Versys 650 and the Suzuki V-Strom 650 XT.

To give you a quick recap, the new Tiger Sport 660 is based on the Trident 660 roadster that is already available in the Indian market. The Tiger, however, features a different design and hardware. The new Tiger Sport 660 uses sub-frame and a longer travel suspension setup as compared to the Trident 660. The styling cues include a semi-fairing and tall windscreen, a step-up saddle, integrated pannier mounts, and an underbelly exhaust.

The new Tiger Sport 660 will use a 660cc, inline-three cylinder, liquid-cooled motor. The engine is linked to a six-speed transmission and it is tuned to deliver 80bhp at 10,250rpm and 64Nm of peak torque at 6,250rpm.

The pre-bookings of the Tiger Sport 660 had already commenced and a few Triumph dealers have confirmed to Bikewale that the response has been really well for this motorcycle. We expect Tiger Sport 660 to arrive in a similar price range as the competition. Thus, we expect the ex-showroom tag to hover in the Rs 8-9 lakh range.