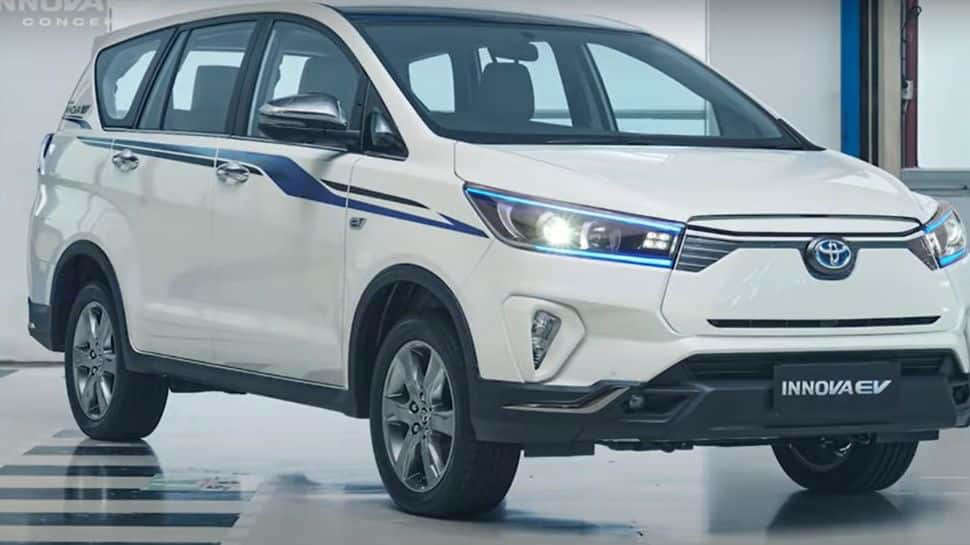 Toyota has been reluctant about revealing its plans for its electric vehicles. However, creating a hole in the shield of reluctance, the Japanese automaker has brought to light its fully electric Innova MVP at the Indonesian International Motor Show in Jakarta. The MVP has been on sale in the market with an ICE powertrain.

In addition, several media reports also suggest that Toyota has been using its resources to put together its EV programmer. As per the reports, the company is using a big part of its resources to develop a dedicated platform for its future electric versions of its combustion engine models.

Coming back to the Toyota Innova EV, the car has very similar looks to the ongoing ICE version of the MVP already on sale in the Indian market. The primary design difference can be seen on the car’s front end, as the electric version doesn’t have the kind of grill as on the ICE version.

The gap of differences between the two versions of Innova is increased with blue highlights all over the body of the car. The blue highlights even find their way into the headlamps and taillights of the electric vehicle going all the way to the Toyota logo in the front centre.

Regarding the interiors, the Innova EV has similar interiors as the combustion engine version. The dashboard layout with a 9-inch touchscreen infotainment system poses striking similarities. The blue strips are present in the interiors as well in the form of highlights with the dark and light tones of the upholstery.

As for the features, the electric Toyota Innova has a digital instrument cluster, multifunction steering and infotainment touchscreen with Apple CarPlay and Android Auto connectivity. The car is speculated to get features like a 360-degree camera, an air purifier and cruise control, among other things.

As per the official announcement the Toyota Innova EV presented is a concept. However, there is no announcement on when the car will hit the production line.