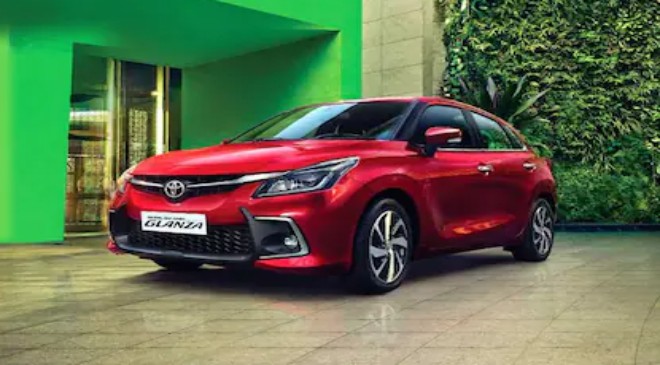 Touted as the most affordable Toyota in India, the new Glanza features a new sporty design and will be available in both manual as well as automatic transmission options.

Toyota Kirloskar Motor, on Tuesday, launched the 2022 iteration of hatchback ‘Glanza’ in the country for a starting price of Rs 6.39 lakh (ex-showroom, India). Touted as the most affordable Toyota in India, the new Glanza features a new sporty design and will be available in both manual as well as automatic transmission options.

Toyota had already begun accepting bookings for the new Glanza and one can make an advance payment of Rs 11,000 as a token via its dealership for the same. The new Toyota Glanza goes up against the likes of Maruti Suzuki Baleno, Tata Altroz, Hyundai i20, VW Polo and Honda Jazz.

The prices for the Glanza’s base E trim starts at Rs 6.39 lakh and goes up to Rs 9.69 lakh for the top-spec S automatic trim (ex-showroom, India). Interestingly, this is also the first Toyota hatchback in India to come with an AMT gearbox.

Toyota Kirloskar Motor, which is a joint venture between Japanese automotive Toyota Motor Corporation and Indian conglomerate Kirloskar Group, had unveiled the re-badged Maruti hatchback just a few weeks after the Maruti Suzuki launched its Baleno.

To make the new Glanza stand apart from its Baleno counterpart, Toyota had installed a new, chrome-heavy grille at the front, which makes it look different from Baleno’s front fascia. However, in the previous models of the Glanza hatchback, there were hardly any significant differences between it and the Maruti’s counterpart as both the cars looked similar, except for the badges.

The new Glanza, which still has much in common with the Baleno, has similar proportions and silhouettes. However, the new Toyota Glanza now sports a new Camry-like front grille, a sportier bumper and newly designed headlights with simpler LED DRLs.

The 2022 Toyota Glanza, in terms of inside, gets a layered dashboard and free-standing touchscreen infotainment system similar to the new Baleno’s design. However, the Toyota’s hatchback gets a black and beige colour scheme throughout the cabin, giving it an upmarket look compared to Baleno.

Read More: Tata Motors Set To Unveil Its Next Electric SUV Tomorrow: What We Know So Far

The new 2022 Toyota Glanza comes equipped with a ‘1.2-litre, four-cylinder DualJet K12N petrol engine,’ which develops 90hp of power and 113Nm of torque, and is paired either to a 5-speed manual or a 5-speed AMT automatic gearbox.