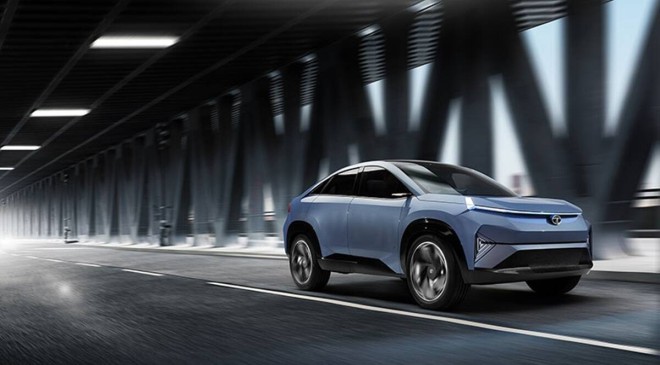 Tata Motors is clearly on EV offensive since the launch of the Nexon EV in 2020. This was followed by the recent launch of the Tigor EV and soon to be launched the long-range version of the Tata Nexon EV. Now, giving us a glimpse into the carmaker’s future EV plans, the Indian automaker has showcased the Curvv SUV Concept. The Curvv is slated to enter into production later in 2024. However, it debuts a new design philosophy, revamped interior, and improved architecture. Let us know each of the aspects in detail.

With the Curvv Concept, Tata Motors introduced the Generation 2 EV architecture. The platform has been re-engineered and will be flexible to support multiple powertrain options. It is expected to take forward all the capabilities of the current platform with significant improvements like housing larger batteries, multiple electric motors, and thus resulting in a longer electric range.

The Curvv debuts Tata Motors’ new design philosophy ‘Less is More’. Looking at the concept, the Curvv features a very clean and neat front fascia. The horizontal LED DRLs run across the width of the raised bonnet. Further down, the bumper holds the triangle fog lamp housing along with a gloss black insert at the edge of the bumper.

However, the most appealing bit is the sloping coupe-like silhouette towards the C-pillar. Adding a sense of ruggedness are the squared-off wheel arches, cladding at the bottom of the doors, and dual-tone alloy wheels. Moving to the rear, there’s a single piece LED stripe that runs across the boot that is further accentuated by the triangle cut-out on the bumper. The gloss black roof along with the red LED surrounding the windscreen lends a modern touch.

The Generation 2 platform will enable the carmaker to house bigger battery packs and with the Curvv Concept, Tata also estimates a certified electric range between 400 to 500 kilometres. Currently, the Tata Nexon EV has a certified range of 312kilometres while the Tigor EV claims a range of 306 kilometres on a single range.

The traits of the new design philosophy can also be seen in the cabin of the Tata Curvv. With a single line running seamlessly across the dashboard, the interior houses two display screens, one for the infotainment system and other a digital driver’s display.

The flat-bottom steering wheel with the two-spoke design has a retro charm to them and gets a mix of physical and touch-based buttons. The HVAC unit lets go of all knobs and buttons and are swapped by a big haptic panel. Moving to the centre console, it holds a large single dial for the gear selector. The upholstery is finished in light blue fabric and there is a massive panoramic sunroof to add to the feel-good factor.

Continuing on the EV onslaught, Tata will introduce the Curvv SUV with an electric powertrain initially. This will soon be followed by its ICE counterpart. The Tata Curvv will enter production in 2024 and is expected to make its debut sometime in the same year.