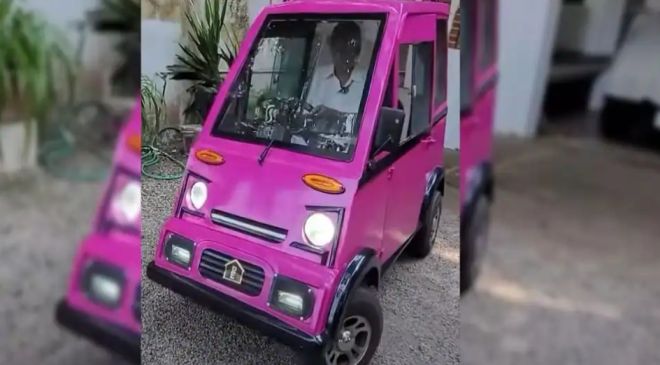 The number of individuals using electric vehicles will grow as the technology evolves and becomes more accessible to the general public. Nevertheless, electric vehicles in general, and electric cars in particular, remain prohibitively expensive in India, since the cheapest electric car available in the country is the Tata Tigor EV, which costs Rs 11.99 lakh (ex-showroom) and has a long waiting list.

As a result, Antony John, 67, a career consultant from Kerala, decided to build an electric car so that he can drive between his home and office, a distance of 30 km. Before, he was using an electric scooter for his commute. He began to search for an electric car that would provide him with a pleasant ride and shield him from the sun and rain as he grew older, but none was on the market at the time.

In 2018, Antony began to contemplate creating an electric vehicle from scratch. To build the car’s body, Antony contacted a garage that specializes in bus body construction, and the garage built the car’s body according to his design, which he got online. Two persons can fit in this little vehicle. According to Antony, the car’s body was built by a workshop, but the electrical work was done by himself.

A Delhi-based vendor provided him with the batteries, motor, and wiring. He was unable to complete the project in 2018 because of an epidemic and a lack of experience in making an electric car. In the beginning, he overestimated the battery capacity of the car, which led to a short driving range. It was only after the restrictions and lockdowns had been lifted that he contacted the seller, who advised that he upgrade the car’s battery.

After installing the new battery, the electric vehicle had a maximum range of 60 km. Because of this, Antony drives his electric vehicle to work every day and just cost him Rs 5 daily to fully charge his home-made EV. Being a small vehicle, it can easily navigate narrow city streets where a larger vehicle would struggle.

In the video, Antony mentioned spending around Rs 4.5 lakh on this project and that he is also working on a different electric vehicle.