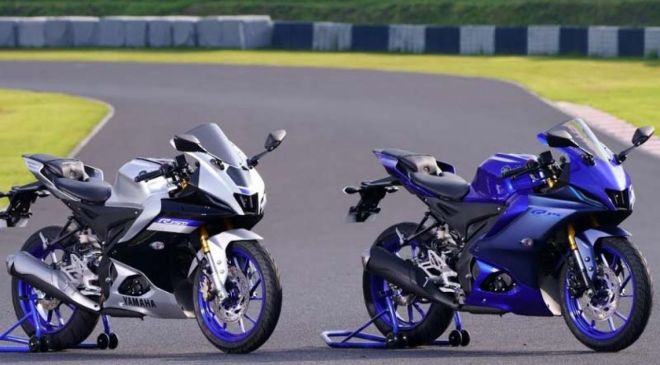 In a surprise move, Yamaha Motor India has launched the R15M World GP 60th Anniversary Edition in India following the debut of the MT-15 Version 2.0. The special edition R15 V4 made its debut in Indonesia last year.

What’s Its Price? Who Are Its Rivals

The Yamaha R15M enjoys a unique position in our market with no direct rival. However, its closest competitor is the 2022 KTM RC200 which is priced at Rs 2,08,717 (ex-showroom Delhi).

The Yamaha R15M World GP 60th Anniversary commemorates the Japanese bikemaker’s 500 Grand Prix wins since 1961. And to highlight that, the R15M now comes draped in the iconic white and red ‘speed block’ colour scheme with golden alloys. Team Blue has already released this livery internationally with a bunch of products including the YZF-R1 and R7.

It continues to use the same VVA-equipped 155cc liquid-cooled single-cylinder motor producing 18.4PS at 10,000rpm and 14.2Nm at 7500rpm. It is mated to a 6-speed gearbox paired with a slip-and-assist clutch.

At Rs 1.88 lakh, the R15M World GP 60th Anniversary Edition is undoubtedly an expensive machine. However, given the supersport’s popularity and lack of competition, it continues to rake in good sales numbers. We certainly love this dapper colour scheme, and now with the R15M here, we wouldn’t be surprised if the Aerox 155 World GP 60th Anniversary Edition too graces the Indian roads.