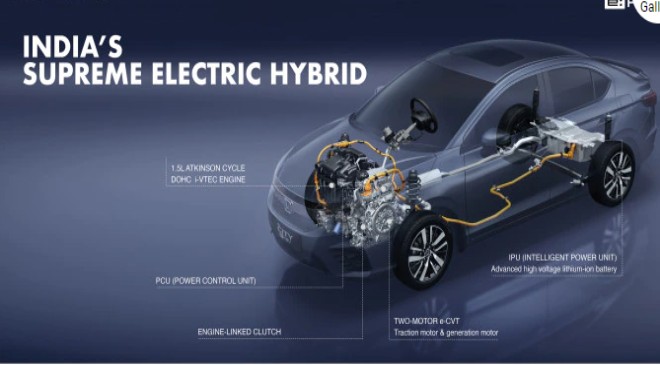 The Honda City hybrid will be the first of its kind in the segment with a proper strong hybrid powertrain. We explain its functioning

The Honda City hybrid is the first ‘strong hybrid’ offering in its segment. It pairs a 109PS/253Nm electric motor with a 98PS 1.5-litre Atkinson-cycle i-VTEC petrol engine, driving the front wheels. Combined output stands at 126PS/253Nm, around 5PS more than the standard City petrol but way more torquier, more than 100Nm to be specific. Like a typical self-charging hybrid, the City allows you to drive in pure EV mode or a mix of both.

But what happens when we let the car do its thing, i.e, not fiddling with the drive modes and letting the computer take care of the business. Well, that’s what we are going to talk about today.

A strong hybrid car primarily drives in pure EV mode most of the time in the city, with the petrol engine assisting it when extra power is required. This principle applies to the Honda City as well. But the Japanese carmaker was more than happy enough to share a few more details (image attached below), which would not only be useful for our viewers, but potential buyers.

A thing to note here the Jazz hybrid, which uses the same powertrain, gets an e-CVT instead of a conventional automatic transmission. The thing here is that there is no gearbox at all. Rather, a clutch is present between the generator and propulsion motor, which comes into play when the car enters into full hybrid mode. A detailed explanation about its functioning can be seen in this video:

As expected from a hybrid offering, the City gets regenerative braking with four adjustable settings via paddle shifters. So while decelerating or braking, the energy that is recovered while slowing down is restored into the battery pack. Plus, whenever required, the engine also steps in to charge the battery pack. The cycle keeps on repeating again, and that’s how the City hybrid works.

Advantages? Well, that’s mainly in the ‘Kitna Deti Hai?’ department. The City has a claimed average fuel efficiency of 26.5kmpl, around 6.5kmpl more than the Ciaz automatic, one of the most fuel efficient models in its segment. Also, hybrids generally tend to be more efficient than their claimed numbers in urban conditions as they tend to be in electric mode for most of the time. So you can expect it to deliver closer to 30kmpl in town. And most importantly, the City hybrid emits less emissions as well compared to any car in its segment.

The new Honda City hybrid will go on sale in May at an expected price of around Rs 18 lakh (ex-showroom). At this price point, the sedan will lock horns with the 1.5-litre TSI variants of the Skoda Slavia and upcoming Volkswagen Virtus.