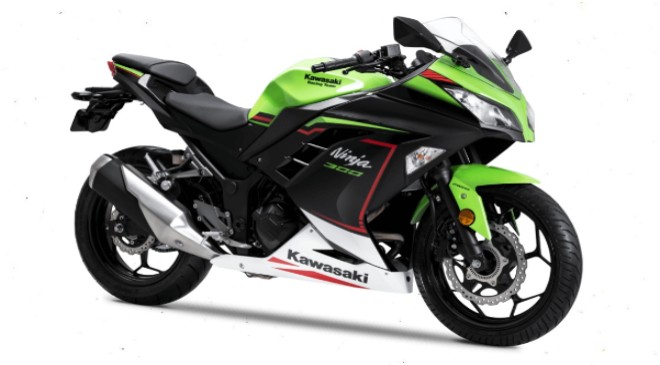 Kawasaki India has officially teased the updated Ninja 300 on its social media handles, hinting at an imminent launch. The upcoming 2022 Kawasaki Ninja 300 is expected to get a bunch of cosmetic updates and some new features as well. Upon launch, this most affordable Ninja motorcycle will go up against the likes of the soon-to-be-launched new-generation KTM RC 390, TVS Apache RR 310, etc.

Currently, the Kawasaki Ninja 300 is offered in three colour schemes. They are Lime Green, Ebony, and Candy Lime Green shades. The upcoming model is expected to get new colours as well as spruced-up graphics on the body panels. Moreover, the teaser image hints that it might get a revised headlamp with LED DRLs, a clear lens LED taillamp, and an updated instrument cluster.

The mechanicals, however, are expected to remain unchanged. Powering the motorcycle will be a 296cc parallel-twin, liquid-cooled, 4-stroke, fuel-injected engine. This motor churns out 38.4 hp of maximum power at 11,000 RPM and 26.1 Nm of peak torque at 10,000 RPM. The engine comes mated to a 6-speed manual gearbox and it gets an assist & slipper clutch too.

In terms of hardware, the Ninja 300 gets 37 mm telescopic forks at the front and a gas-charged mono-shock absorber at the rear with five-way preload adjustability. The braking duties are performed by petal disc brakes at either end and it gets dual-channel ABS too. Kawasaki’s Ninja 300 is currently priced in India at Rs 3.37 lakh, ex-showroom. One can expect the upcoming model to charge a slight premium over the current price.