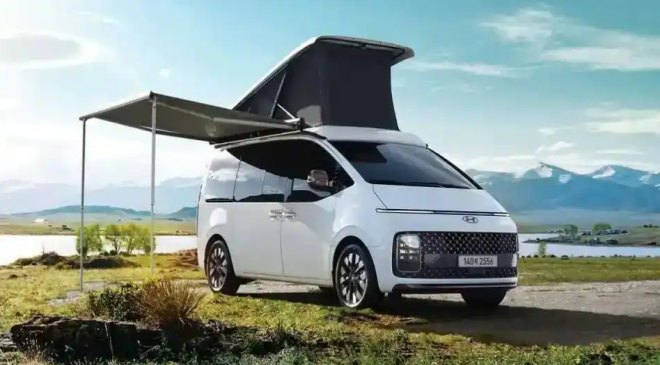 Hyundai Staria is one of the most versatile minivans from the Korean automaker. Last year, the minivan was brought on the market with various configurations accommodating two to eleven seats. It is to be noted that the vehicle has been the base for making a cargo van, a school bus and now a camper. The vehicle in the form of a camper comes as the new Staria Lounge Camper.

Keeping the versatility of the base model intact, the new camper has been launched in the South Korean market in the Camper 4 and Camper 11 variants based on the number of seats. In addition, it comes with a myriad of features, making it a capable camper like a deployable roof ten and an air mattress.

To make it more accommodating the cabin of the camper gets various amenities like a folding table, a 36-litre refrigerator, a sink and faucet set and built-in side shelves. Moreover, you can attach a shower head to the back. The Staria Lounge Camper also comes with power sockets for various devices. Furthermore, Hyundai offers a mosquito net to keep the bugs away when the tailgate is opened.

The Staria is powered by a 2.2-litre turbodiesel four-cylinder and an option of a naturally aspirated 3.5-litre V6 with gasoline and LPF fuel options.