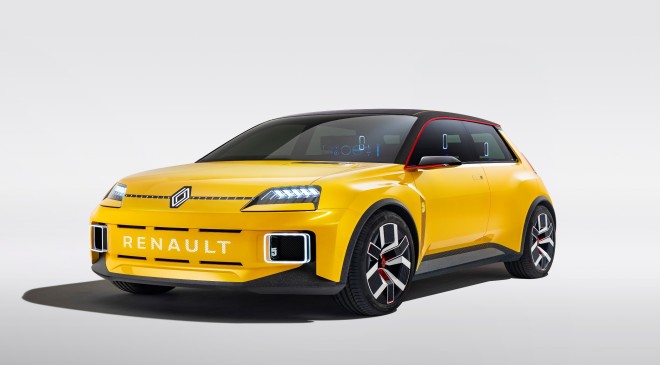 The new Renault hydrogen combustion concept will be unveiled on May 19 at the ChangeNow summit. The French carmaker has released the second teaser of this concept which translates the company’s sustainable development commitments and vision of mobility. According to Gilles Vidal, Renault Design Director, under whose direction this concept car is designed, this vehicle showcases Renault’s objective of achieving a 100 per cent electric energy mix by 2030.

Renault has been investing in different types of alternative fuels and the concept will showcase the uniqueness of the internal combustion engine. Unlike the traditional powertrains that rely on fossil fuels like diesel and petrol, this concept’s motor will rather be fueled by hydrogen.

The new teaser focuses on the illuminated Renault badge on the concept’s window. This could indicate that all alternative-powered vehicles from the French manufacturer may come with this diamond logo. The previous teaser that was revealed in February showed the front profile of the concept. The slim LED headlamps, front grille and the illuminated Renault badge on the nose do have some resemblance with the Megane-E Tech Electric. The vertically shaped daytime running lights of the new concept covers the traditional air dams.

The profile of the concept suggests that it will be tall in height, maybe a crossover or an SUV. It certainly looks taller than the all-electric Megane. Take a closer look at the outside rearview mirrors (ORVMs) and the concept comes with side cameras instead of conventional mirrors which could be carried over to the production vehicle as many carmakers are offering digital mirrors in Europe. The latest to join this bandwagon is Hyundai, who will offer it on the Ioniq 5 in the latter half of this year.

Hydrogen combustion technology is not a new concept as Toyota has been testing this on the Corolla and the Yaris. Both use 1.6-litre turbocharged engines, but it’s fueled by hydrogen. This three-cylinder engine is sourced from the GR Yaris.

Read More:-Ferrari 296 GTS convertible unveiled with 830 horsepower, has a top speed of 330 kmph

ChangeNow is the world’s largest event for the planet and will take place at the Grand Palais Ephémère and the Eiffel Tower, from May 19 to 21 in Paris.