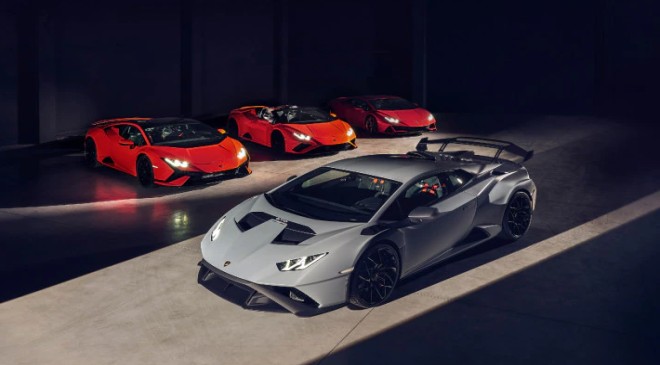 Eight years… That’s the time Lambo has taken to roll out the 20,000th Huracan from its Sant ‘Agata Bolognese facility, and we give a very brief overview of how Lambo’s entry-level sports car has evolved since 2014

The Lamborghini Huracan has had a dream run in its eight years of existence, and the 20000th unit has just rolled out from Sant ‘Agata Bolognese. The milestone car was a Huracan STO finished in this succulent Grigio Acheso Matt Grey and will be heading to its home in Monaco soon.

It might just be an entry-level Lambo, but the Huracan brings mad amounts of fun with its delectable looks, a techy cabin, and most importantly that raw and un-electrified 5.2-litre naturally aspirated V10 motor. During its tenure, the Huracan spawned no less than 12 road-going and three race-specific versions.

2014 was the year the Huracan was presented to the world at the Geneva Motor Show. It replaced the Gallardo as the new entry-level Lamborghini, and people were gaga with its baby Aventador-like looks. Apart from the 610PS 5.2-litre V10 petrol engine, what it brought to the table was Lamborghini’s ANIMA drive system (Drive modes), LED lighting throughout the car, and dual fuel injection systems.

But naturally, this version of the car was a bit more responsible and easier to handle, thanks to the power being sent to all four corners. So Lamborghini dialled up the fun quotient in 2015 by introducing the rear-wheel drive Huracan. Yes, power is down to 580PS, but thanks to the deletion of the AWD components, the weight has also gone down by 33kgs. So if needed to, this version can light up its rear tyres and can be tail happy on twisties.

But to improve the fun quotient, Lamborghini brought in the Huracan Performante in 2016, and it was the first proper performance variant of the supercar. The 5.2-litre V10 petrol engine has been squeezed to develop 640PS (30PS more) and has active aerodynamics for razor sharp handling. As a result, this version broke the Nordschleife lap record, and went on to win plenty of awards as well.

The Huracan then went to soldier on for three more years before the next big update; a facelift, introduced in 2019 as the EVO. This version was introduced with the 640PS engine from the Performante for all-wheel drive and 610PS (30PS more) for rear-wheel drive. It also comes in coupe and convertible body styles, so a total of four variants are offered even as you read this.

But most importantly, the Huracan EVO got a big boost in technology with the introduction of the Lamborghini Integrated Vehicle Dynamics (LDVI), which is basically the brain of the car. It can be accessed via the updated and larger 8.4-inch touchscreen infotainment system that removes the raft of buttons. It manages the amount of power to be sent to each wheel and aerodynamics for a more surreal driving experience.

And then in 2021 came the STO, a proper track-focussed version of the Huracan that is road legal. Instead of me telling you about this version, I’d recommend you to read our review, where our boss man had a ball of a time pushing the nuts of a supercar around the Buddh International Circuit.

The latest version of the Huracan, the Tenica, was released recently in 2022. It’s basically the Huracan STO, but dials in a bit more of road-friendliness so it can be easier to handle through the jams of Mumbai or twisties of Aamby Valley. Plus, this version, according to this author, is the best looking Huracan till date, especially the front splitter with dollops of carbon fibre.

So what’s next? Lamborghini will be releasing one more special variant of the Huracan EVO before the iconic V10 motor has been hybridised. Yes, the inevitable thing of electrification has bitten Lamborghini, but there is still time before the icon goes all-electric. So if you still want to experience the humming V10 engine without all the tech, this might be the right time.