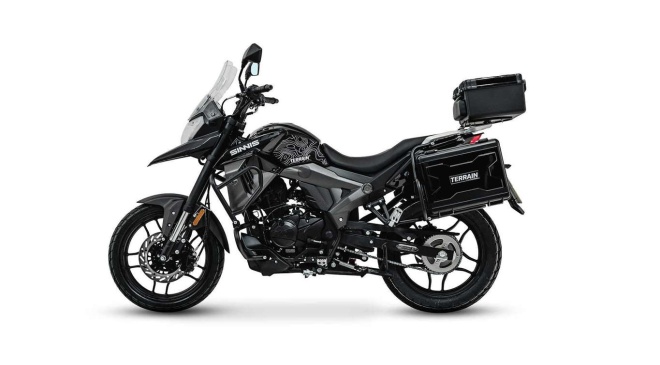 This limited-edition adventure bike based on the Terrain 125 has been released in the U.K.

Sinnis, a brand known for its stylish and sporty beginner-friendly motorcycles in the U.K., has released a limited edition model based on the Terrain 125 adventure bike. It’s called the T125 Black Edition, and it looks really sleek and stealthy. It joins the standard Terrain 125 in Sinnis’ beginner-focused model range, as well as several other street-focused naked and sportbikes.

The beginner ADV segment is something that’s relatively new. A decade or so ago, there were only a handful of adventure bikes with small engines geared specifically for new riders. These days, the options are rather plentiful when you look at the 250cc to 400cc range. However, for first-timers with A1 licenses, it’s hard to beat the Sinnis Terrain 125. From a styling perspective, the Terrain 125 is everything you could ever want from an ADV. It’s got the unmistakable pointy bodywork and tall windscreen. It’s long-travel suspension and dual-purpose tires make it a practical, go-anywhere machine, too.

The Sinnis Terrain 125 is equipped with a 125cc, fuel-injected, liquid cooled, single-cylinder engine. It has 12.7 horsepower on tap, meaning it falls well within A1 licensing terrain, and could very well be a first-time rider’s very first motorcycle. Inverted front forks, a preload adjustable rear-monoshock, and front and rear disc brakes mean that young riders can answer the call of adventure and hit some light trails and gravel roads. Plus, a 14-liter fuel tank promises some pretty impressive range.

With the new T125 Black Edition, Sinnis gives the Terrain 125 a refreshing new look. It’s shod in an all-black livery with an adventurous design, and showcases the longitude and latitude coordinates of Sinnis’ headquarters in the U.K. These graphics are placed atop a satin black finish, which really gives this entry-level adventurer a premium look and feel. That being said, beneath the sleek and stealthy aesthetics, nothing else changes. The Black Edition does, however, get a £200 markup, meaning it retails for £3,499, or roughly $4,409 USD.