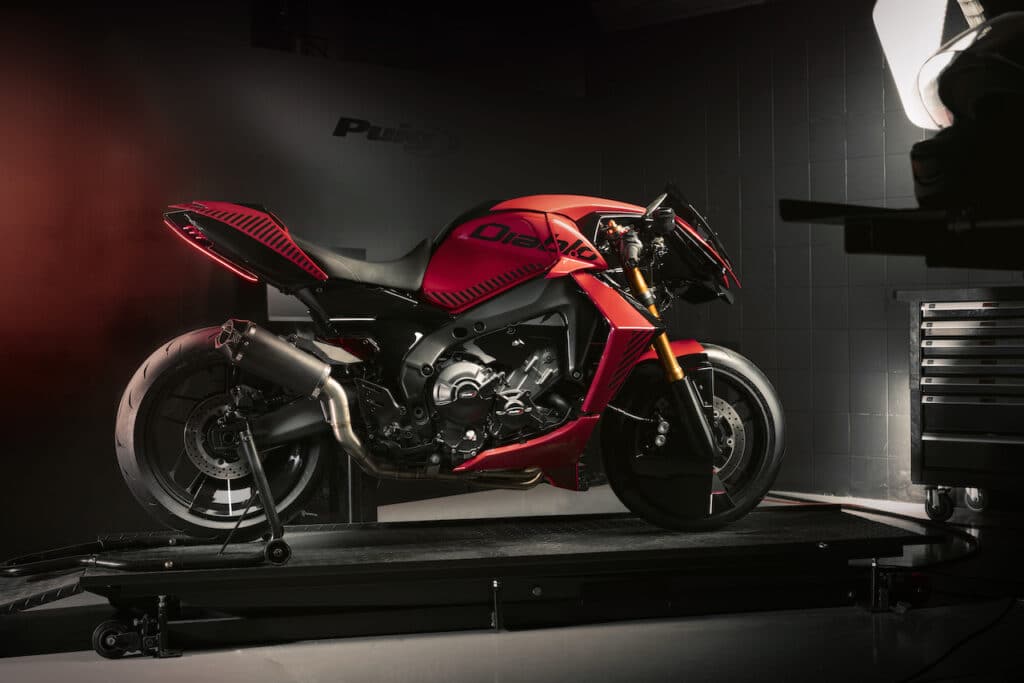 This custom machine gets active aero and futuristic styling.

The custom motorcycle scene is, for the most part, dominated by neo-retro and classic bikes built and modified to varying degrees. While some custom shops choose modern machines as their blank canvases, these builds are far and few in between, and can sometimes be rather lackluster, or overly fancy.

What we have here today is a custom machine based on a thoroughly modern machine, and has quite a bit of research and development behind it from no less than Spanish aftermarket equipment manufacturer Puig. What you’re seeing here has been named “Diablo”, and it’s an over-the-top futuristic concept bike based on the Yamaha MT-09 SP. At a glance, it can be really hard to see a trace of the Japanese naked bike beneath all the bodywork. The custom machine, after all, is a huge flex of the capabilities of the Spanish aftermarket company.

The Diablo is a result of Puig’s Everflowing Design project, and focuses heavily on aerodynamics. The bike’s sharp bodywork has been wind tunnel tested, and dramatically alters the rider’s position from an upright street-focused stance to an aggressive, fully tucked position. What’s more is that elements of the bodywork feature active aerodynamics, with sensors capable of determining when certain elements move in order to provide more downforce.

Particularly, the windscreen and side-fairings all feature active aero. The windscreen retracts up and down shielding the rider from wind blast, while the fairings extend to the sides providing downforce and ducting air to cool the engine. Other striking elements include the thoroughly redesigned front end with a sleek single LED headlight, as well as the sharp rear cowl with LEDs seamlessly integrated into the design. Up front, the cowl extends over the triple trees giving the bike a flowing, extremely aggressive stance. Disc brake covers are said to provide even more aerodynamics while keeping the entire look thoroughly futuristic.

Of course, given how sophisticated the entire setup is, it’s safe to assume that Diablo will be limited to a concept, at least for now. One can only imagine how technologically complicated, not to mention expensive, it would be to develop and market stuff like this for a variety of street-oriented models. Plus, so much R&D already goes to bikes out of the manufacturer’s factory, that it may seem pointless to drastically alter aerodynamic elements like this. Nonetheless, active aero is one of the many technologies that are only just beginning to appear on production models, and is undoubtedly something that we will see more of in the future.