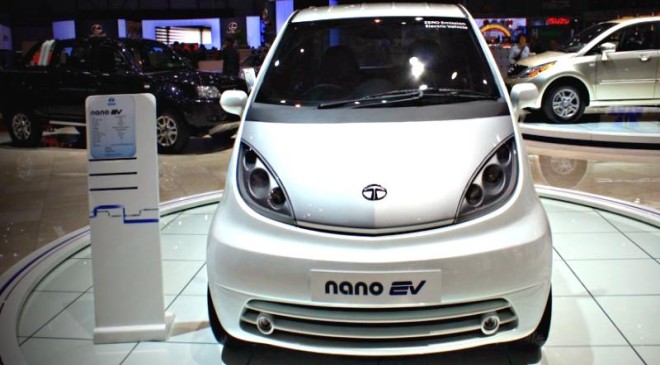 The renowned industrialist Ratan Tata was recently seen arriving in his customised Tata Nano EV at the Taj Hotel in Mumbai, and here’s all about the electrified iteration of the Nano.

Ratan Tata is followed for his down-to-earth nature and simplistic living. The Industrialist owns a couple of cars, and the list includes some fancy imports as well. However, the Tata Nano remains closest to this heart. From deciding to make a car under Rs 1 lakh to fulfilling the promise, Ratan Tata enjoys love from the countrymen. Recently, the industrialist was seen travelling in a Tata Nano to the Taj Hotel in Mumbai. While netizens praised him for his rather subtle choice of car, we could figure that the Nano in use was an emission-free vehicle. Yes! The Tata Nano that belongs to Ratan Tata is actually an EV.

In the stock form, the Tata Nano was offered with a two-cylinder petrol engine that was naturally-aspirated in nature and displaced 624 cubic centimetres of air-fuel mixture.The engine developed a peak power output of 37 bhp and 51 Nm of max torque. This particular example, however, uses a 72V powertrain, offering a claimed driving range of around 160 kilometre.

The Tata Nano EV can accelerate to 60 kmph from a standstill in just 10 seconds. This is a custom-made example that has been gifted to Ratan Tata by Electra EV, which is an electric powertrain solution providing company. Apart from the new powertrain, this customised Nano is visually bone stock.

Dubbed the most affordable car in the world, the Nano was launched for the first time in the year 2008. It was designed with an intention to offer safer and convenient mobility to smaller families with two-wheelers. Sadly, the Tata Nano could never help the carmaker’s sales tally shoot high. Although it had a lot on its side, the poor marketing strategy only meant low sales for the Tata Nano. It was only in 2018 that Tata Motors decided to pull the plug on its most accessible product.