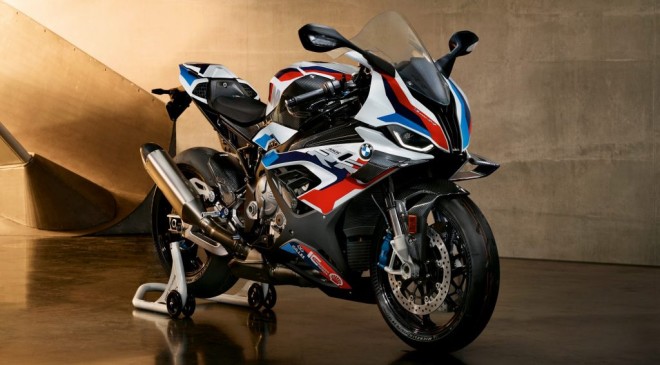 BMW Motorrad has introduced the new anniversary edition of the M 1000 RR in the international markets. The new model commemorates the company’s M division’s 50th anniversary and bears the same name. The motorcycles come with updated looks featuring exclusive Sao Paulo Yellow paint with hints of black highlights on the body. The new colour gives the motorcycle its unique appearance and sets it apart from the regular M 1000 RR. It is to be noted that the standard version of the bike comes with white paint complemented by red and blue livery.

Read More:-Honda Previews The Prologue As A Family SUV For An All-electric Future

Apart from the paint, there are no major changes in the motorcycle’s design. However, the special anniversary edition BMW M 1000 RR comes with the ‘competition’ package as standard. The package includes extensive carbon fibre, aluminium swingarm and digital code to unlock the GPS data module.

The motorcycle gets no mechanical changes, it continues to be powered by a 999cc liquid-cooled in-line four-cylinder engine. The engine on the sports motorcycle kicks out 205 hp and 113 Nm of peak torque. The engine propels the bike from 0-100 kmph in 3.1 seconds and can achieve a maximum speed of around 302 kmph. For the anniversary edition, the bike gets carbon fibre winglets.

For the hardware, the bike gets manually-adjustable Marzocchi suspension. Also carried over from the basic S 1000 RR motorcycle are the tyres (Dunlop SportSmart TT).

Bookings for the new model have already begun on the international market as of May 20th. However, it is yet unclear whether the bike will be sold in the Indian peninsula or not. With an ex-showroom price of Rs 42 lakhs, the basic M 1000 RR is now one of the most expensive motorcycles available in India. According to BMW Motorrad’s configurator, the M Competition pack adds Rs 3 lakh to the pricing.