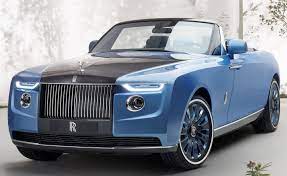 Rolls-Royce has built a one-off Boat Tail, its second model the series for a Pearl businessman with a reported price tag of $28 million (over Rs 200 crore). With two down, that leaves just one more to go in this very exclusive lineup. As per reports, the unknown owner of the second home-built Boat Tail is a pearl businessman from Italy and the interior carries similar inspiration from pearl shells with more cognac, more walnut, more rose gold, and naturally, mother-of-pearl accents. The Boat Tail owner actually supplied Rolls-Royce with mother-of-pearl from his own collection to use during construction. The four shells presented to Rolls-Royce has been used in the exterior as well, with the same shades being used in paint shade. Here’s a look at the uber-luxury sedan to understand what makes it so special.1/9

Rolls-Royce has unveiled the second of three exclusive hand-built Boat Tail luxury sedan in Concorso d’Eleganza, Villa d’Este in Italy. Referred to simply as “the next chapter”, the Boat Tail is made of a Pearl businessman has a reported price tag of $28 million (Rs 220 crore).

The unknown owner of the vehicle presented four shells to Rolls-Royce for inspiration each having different shades namely – cognac, walnut, rose gold, and naturally, mother-of-pearl accents. Rolls-Royce added all four shades to the exterior as well as the interior.

The result is one of the most complex finishes ever developed by Rolls-Royce Bespoke, consisting of oyster and soft rose for the foundation with flakes of white and bronze mixed in. The hood wears a darker cognac colour with more bronze and some gold tossed in.

This special vehicle is coachbuilt by hand just like the first model, making prolific use of aluminum in the process.

The rear of the hand-built Boat Tail gets walnut veneer with rose gold pinstripes. In photos, the car gives an impression of beige with a kiss of rose.

The picnic area with the umbrella is part of the design of the entire Rolls-Royce Boat Tail series.