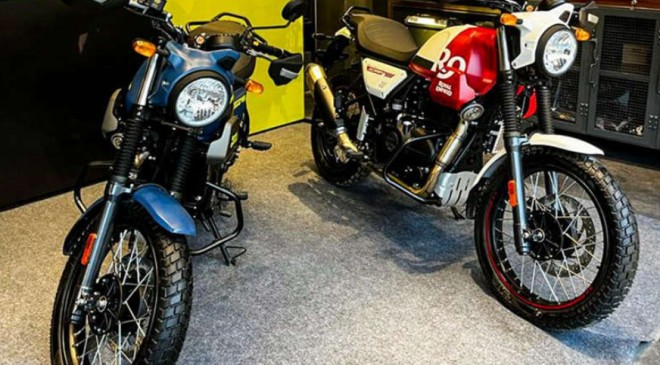 – The custom Continental 650 was presented at the Busted Knuckles Build-Off, Australia

– Gets a new bodywork, suspension work and other bits as well

When it comes to versatility, Royal Enfield motorcycles have proven to be the canvas for some extreme levels of modification. This time around, it’s the race-ready Royal Enfield Continental GT 650 from Royale Motorcycles. This enthralling build was presented at the Busted Knuckles Build-Off competition held in Australia and labeled as No. 55 GT 650 Production Racer.

The idea stemmed from the Royal Enfield GT cup hosted in India. However, the boffins at Royale Motorcycles wanted something more extreme and there began the chop down. The round headlight has made way for a fiberglass fairing which makes the bike’s fascia look anything but retro-like before. Backing up the sharp cosmetic work is a list of promising hardware to give the No. 55 GT 650 Production Racer, the necessary performance.

It’s powered by the same 650cc twin motor but the restricted exhaust has been replaced by a free flow unit. In its stock form, the Continental GT 650 dishes out, 47 bhp and 52 Nm. So the race-bike is likely pushing higher figures.

The subframe has also been tweaked and the No. 55 GT 650 Production Racer gets fully-adjustable golden USD forks, borrowed from the Triumph Daytona. The rear gets a fully adjustable monoshock linked to an old Honda-borrowed swingarm.

Even the 17-inch alloys wrapped in sticky Pirelli Diablo Supercorsa SC slicks have been sourced from the British supersport. Meanwhile, the braking hardware comes from Nissin with twin front discs and a single rear unit.

Not to mention, the No. 55 GT 650 Production Racer is a testament to the level at which the Royal Enfield motorcycles can be modified. So, if you own either of the 650 twins and fancy some customization, get in touch with your local chop shop!