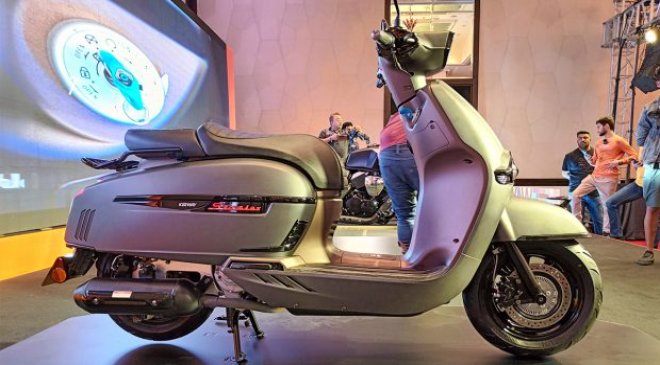 The Hungarian automaker Keeway has announced the introductory prices for its new product lineup – Sixties 300i and Vieste 300 at Rs 2.99 lakh for both the scooters (ex-showroom, pan-India). Founded in 1999 in Hungary, KEEWAY is in over 98 countries. The company’s plan for India is to introduce a total of eight products across four categories by the end of 2022. This will include two products each in the categories of high-end scooters, cruisers, sport motorcycles, and retro-street motorcycles. Keeway will also give 2-year unlimited kilometres warranty as standard.

The SIXTIES 300i is a retro classic scooter. But hiding under those looks is a 278cc, single-cylinder, four-stroke, liquid-cooled engine that produces a maximum power output of 18.7HP at 6500 rpm and a maximum torque of 22Nm at 6000 rpm. On the safety front, it gets 120/70-12 tires and disc brakes with dual-channel ABS. As for features, it gets a split-seat, retro-styled grille, full-LED headlight combined with dual LED brake lights and signal lights. A multi-function ignition switch incorporates the electric starter, the under-seat storage access, and a steering lock. The Keeway Sixties 300i is available in three colours – Matte Light Blue, Matte White, and Matte Grey.

The Keeway Vieste 300 is a maxi-scooter that gets European looks. The aerodynamic design with angular bodywork is both aesthetic and functional as it wraps around the cockpit, reducing turbulence at high speed. The headlights, powered by four LED projectors and DRLs, are claimed to provide ample illumination. The LED taillights and turn indicator signals sit flush with the bodywork. The Vieste 300 comes with a keyless fob for high convenience and safety. This is also powered by the same 278cc liquid-cooled four-stroke engine that produces a maximum power output of 18.7HP at 6500 rpm and a maximum torque of 22Nm at 6000 rpm. Additionally, it gets a massive 12-litre fuel tank, Continental Belt Drive system, front and rear disc brakes, telescopic shock absorbers, and Dual-Channel ABS. It is available in 3 colours – Matte Black, Matte Blue, and Matte White.

Both these products get the Keeway Connect System. The integrated GPS unit with SIM card connects to the Keeway application and telecasts the whereabouts of the vehicle. An inbuilt battery powers the system and the vehicle can accurately track to 2.5 meters of its vicinity and for up to 3 hours even with the unit disconnected from the main battery. Other key features of the application include – remote switching off the engine, setting up of a geo-fence, maintaining ride records, setting max speed limit, and sharing location information with friends on community rides. For assistance during emergency requirements, the panic button feature helps transmit real-time location to 2 pre-set contacts via the app and also sets the process to avail roadside assistance.

Partnering with Adishwar Auto Ride India, Keeway would leverage Benelli’s dealer network of over 40 outposts across India and its assembly plant which is equipped to meet the growth plan, as per the company.