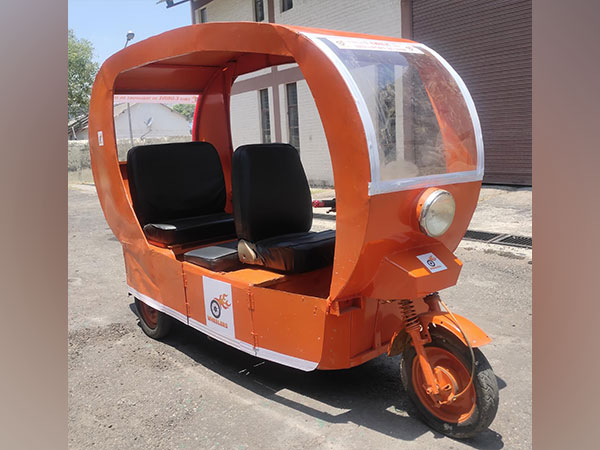 The Indo-Tibetan Border Police (ITBP) has come up with a unique example of ‘best out of waste’ as it manufactures an E-Drive Auto named `Hawk` by assembling scrap. The e-drive auto has been made by the trainees of the ITBP Auto Electrician course as a learning project by overhauling and assembling scrap. The e-vehicle has been manufactured at Transport Training School, Transport Battalion ITBP Chandigarh. The maximum speed of the e-vehicle is 20-25 km/hr with a seating capacity of five people and battery backup for six hours.

The vehicle is made of scrap and the total cost of fabrication stands at Rs 30,000. Presently, the `Hawk` is being used at the ITBP Chandigarh campus to carry personnel to various destinations. A total of four batteries are used in the vehicle with a 48-volt capacity and telescopic shock absorber and leaf spring-type suspension. The vehicle is equipped with a cutting-edge mechanical drum-type brake, direct-drive transmission, and 3″ X12 6 PR tyre.

With the vision to have environment-friendly vehicles and innovations along the lines of ‘Make in India’ by making quality vehicles, ITBP Spokesperson Vivek Pandey told ANI that the “initiative will be a landmark in the force of more such innovations in the future.” “With the help of scrap and other related waste materials more innovations may take place. It will surely motivate other such innovators to go ahead with their innovations with low cost and durable e-vehicle solutions,” Pandey said.

“The E-Drive Auto `Hawk` has been made by the trainees of the ITBP Auto Electrician course. Almost 8-10 trainees manufactured the e-vehicle as a learning project by overhauling and assembling scrap at Transport Training School, Transport Battalion ITBP Chandigarh. The maximum speed of the e-vehicle is 20-25 km/hr with a seating capacity of 5 persons and battery backup for six hours,” said the officer.

Raised on October 24, 1962, the ITBP first time has come up with such a vehicle beyond its primary work to guard 3,488 km long India-China borders ranging from Karakoram Pass in Ladakh to Jachep La in Arunachal Pradesh. Apart from this, the ITBP also has important roles in many internal security duties and operations against the Left Wing Extremism in the state of Chhattisgarh.

ITBP is a specialized Armed Police Force of the Nation which trains its personnel in various disciplines including mountaineering and skiing apart from intensive tactical training, thereby creating a distinctive image of the Force. Most of the ITBP’s Border Out Posts (BOPs) are located at altitudes ranging from 9,000 ft to 18,800 ft where temperatures drop to minus 45 degrees Celsius in extreme winters.

ITBP also conducts relief and rescue operations as `First Responders` for natural calamities in the Himalayan region. The force has a glorious history over the past six decades in which the jawans of the ITBP have made many sacrifices in the line of duty and in the service of the nation.