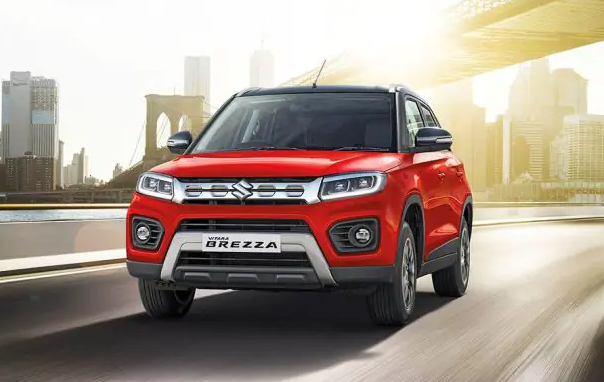 Maruti Suzuki is consistently upgrading its model line with the facelift version of its ongoing models. The Indian automaker has already launched an upgraded version of Baleno, Ertiga and XL6. Now the company is all set to bring 2022 Brezza to India. The car has been one of the popular choices among Indian buyers in the mid-size SUV segment, although it’s been a while since the model was updated.  Based on the recent report by the auto news website Maxabout, the 2022 Maruti Suzuki Brezza the car will get new features like paddle shifters, wireless charging, a sunroof, and a head-up display (HUD) and a bigger infotainment touchscreen. Based on the other facelifts launched by the manufacturer, the aforementioned features are not very fetched.

The leaked images of 2022 Brezza in a video by Extreme Media show the white SUV with a sunroof. Based on the images, the SUV will have some significant changes in its appearance. The vehicle features a redesigned front grille with a blacked-out chrome strip and a Suzuki logo in the centre. Moreover, it also shows newly designed headlamps with LED DRLs complementing the grille along with the updated tail lights with black highlights.

The new design scheme continues to the interiors of the car as well. It gets a new dashboard. The new interior is expected to have features like wireless charging, paddle shifters, and a 360-degree camera, among other things. Moreover, the SUV is also expected to have better safety features compared to the older model.

The ongoing model of the Maruti Suzuki Brezza gets a 1.5-litre naturally aspirated, four-cylinder, petrol engine mated with a 5-speed manual gearbox. It also gets an option of a 4-speed automatic torque converted transmission. The engine produces 103 hp of power and 138 Nm of Max torque.

Maruti Suzuki Brezza has been in the Indian market for six years. However, the lack of modern features is holding it back in the face of competition. The SUV competes against other mid-size SUVs like Hyundai Creta, Kia Sonet, Tata Nexon and Toyota Urban Cruiser.