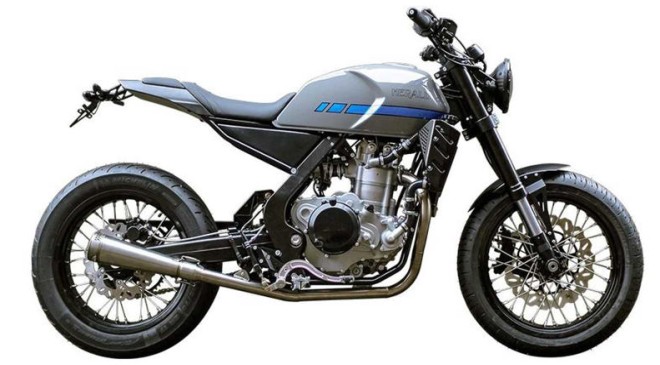 It tips the scales at just 145 kilograms and packs a 43-horsepower punch.

Herald Motorcycles, located in Huntingdon, was founded in 2010 and is part of the wider Encocam engineering company. They are noted for their variety of predominantly 125 and 250cc Chinese-made, air-cooled budget-focused single cylinder engines with British-designed vintage and scrambler aesthetics.

The Brute Concept, the company’s first British-inspired bike, was released in 2018. It is the firm’s first British-designed, developed, and produced motorbike, according to the company. The bike’s production variant, the Brute 500, has finally found its way to the U.K. market in 2022, and retails for £6,950. With its cropped tail section, upright handlebars, streamlined indicators, and round headlamp, the bike has a minimalist, classic-inspired appearance. An all-LED lighting system and a full-LCD instrument cluster, however, give the bike a touch of modernity.

The Brute gets a 449cc liquid-cooled single-cylinder engine housed in a tubular steel frame. British, and has been sourced from Chinese manufacturer Zongshen. It’s the same 449cc engine we find in Fantic’s model range. It does, however, come with some impressive performance, including 43 horsepower. Having ridden the Fantic Caballero Rally, I can say that it has a lot of usable power. Furthermore, the Brute’s very low weight makes things even better. It’s a featherweight, weighing only 145 kilos, which means its power-to-weight ratio is ideal for a thrilling ride.

An inverted front fork and a monoshock at the back handle suspension duties. The Brute 500 is equipped with 17-inch wheels on both ends, as is customary for street bikes. The Brute’s 835mm seat height makes it a little higher, but its relatively thin profile should make it a little easier to set your feet on the ground. With a 13.5-liter gasoline tank, it should be able to go cover quite a bit of ground between fill-ups.

What’s particularly fascinating is that the bike isn’t equipped with anti-lock brakes, which could either mean that it’s built with fun in mind, or to a budget, or maybe both. Needless to say, this bike isn’t for a first-time rider who’s particularly greedy with the throttle, as its power-to-weight ratio could get you in trouble, especially in the wet. With a price tag of £6,950, making out to about $8,739 USD, the Brute isn’t exactly a budget-oriented motorbike.